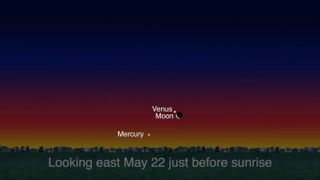 The crescent moon will appear near Venus just before dawn on May 22, 2017. Mercury will also be visible low on the eastern horizon, as seen in this NASA sky map.
(Image: © NASA/JPL-Caltech)

Should your local weather forecast suggest that Monday morning (May 22) will be fair and clear, it will be well worth setting your alarm clock to awaken you about an hour before sunrise. If you head outside at that early hour — and if you have a clear and unobstructed view toward the east — you will be treated to a lovely pairing of the two brightest objects in the night sky: the moon and Venus.

You'll immediately notice the crescent moon. Appearing as slender sliver, the moon's disk will be illuminated just 16 percent by sunlight. Hovering to the upper left of the lunar crescent will be the planet Venus, shining like a brilliant silvery-white celestial lantern of magnitude -4.6 on the brightness scale used by astronomers.

The two objects will be separated by roughly 3.5 to 4 degrees, which is roughly equal to less than one-half the apparent width of your fist held out at arm's length. This won't be an exceptionally close approach between these two object, but their great brilliance makes them an eye-catching sight in the early morning sky. Mercury will also be visible very low on the eastern horizon to the lower left of both objects. [The Brightest Planets of the May Night Sky]

Of course what we'll see it an illusion of perspective. The moon is 229,000 miles (369,000 kilometers) from Earth, while Venus is 243 times farther away at 55.7 million miles (89.6 million km).  Venus will arrive at its greatest western elongation — its greatest angular distance west of the sun — on June 3. But it will slowly get higher in the eastern morning sky right on through the first half of the summer. Currently, Venus is rising two hours before the sun, but by the third week of July that will have increased to three hours.

And Venus will shine at nearly the same brilliance for a number of mornings to come.

Venus currently rises in the east at 3:45 a.m. your local time. The eerie, low glimmering of Venus  is a harbinger of daybreak, which will begin only minutes later. In a telescope, Venus's illuminated portion has fattened to almost half full.

And once you know where Venus is relative to the moon, see if you can see the planet after the sun has come up. You should have no problem glimpsing it in the daytime; appearing as a a tiny white speck against the blue sky.

Incidentally, on Monday the moon will be not be within one of the 12 zodiacal signs. Rather it will be just within the border of the constellation Cetus, the Whale. Because the moon is not always positioned exactly on the ecliptic (its orbit is tilted slightly relative to the orbital plane of Earth), it sometimes can stray into constellations immediately adjacent to the traditional zodiacal signs and Monday will be one of those occasions.

As it is Cetus, what you’ve just read might be considered a whale of a tale!

Editor's note: If you capture an amazing photo of Venus and the moon that you'd like to share with Space.com for a story or photo gallery, send images and comments to us at spacephotos@space.com.

Joe Rao serves as an instructor and guest lecturer at New York's Hayden Planetarium. He writes about astronomy for Natural History magazine, the Farmer's Almanac and other publications, and he is also an on-camera meteorologist for Fios1 News in Rye Brook, NY. Follow us @Spacedotcom, Facebook or Google+. Originally published on Space.com.