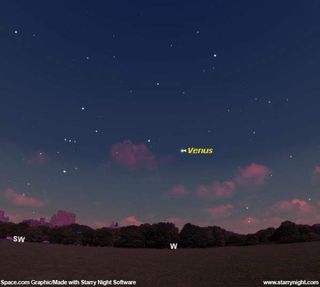 In recent days, I've been getting quite a few e-mails and answering a number of phone inquiries as to "What is that bright light that is hanging in the sunset sky?"

Typical of these is the e-mail I received from Dawn Maniglia of Bronxville, NY: "One of my students was out walking in Manhattan Wednesday evening of last week and is sure she saw a UFO.  I told her I would e-mail you and ask if anything unusual was going on in the sky that night.  Is there anything that could explain her 'sighting'?"

The "UFO" in question is the planet Venus. Calling attention to itself as soon as the Sun goes down, Venus shines brilliantly in the west-northwest sky about one-third of the way up from the horizon.

Some people are rather surprised when I tell them that Venus has been an evening object since mid-December. I've had conversations with people who staunchly claimed that Venus "wasn't there just a week ago" and that this is the first time that they've caught sight of it.

Of course, earlier in the year, Venus was considerably lower in the west-southwest sky, and setting much earlier in the evening (before 7 p.m.).  But now the view is much better.

On Feb. 22, Venus crossed the celestial equator as it plodded northward into the northern half of the sky.  With each passing night, as its angular distance from the Sun slowly increased, its declination in the sky was also improving in a northerly direction.  So Venus' altitude at sunset began to noticeably increase and it also continued to set a bit later each night.

Then, on March 11, most of the U.S. and Canada went on Daylight Saving Time, which meant pushing clocks forward one hour.  Venus was now setting an hour later in the evening: for most locations it remained in the sky until after 9:30 p.m.

But the best is yet to come.

Check out Venus this weekend and you'll see it hovering just off to the left of the beautiful Pleiades Star Cluster.  With each passing night, Venus will continue to soar higher into the twilight sky, not disappearing beyond the west-northwest horizon until around 11 p.m. local daylight time.  On Thursday, April 19, Venus will have company: a beautiful thin crescent Moon will sit several degrees below and to its right.  On the following night, the Moon will have shifted to a point well above and slightly to Venus' left.

On May 10, Venus will attain its highest declination: 26-degrees north of the celestial equator.  Less than a month later it reaches its greatest eastern elongation (greatest angular distance east) of the Sun of 45.4-degrees.  Roughly midway between these two extremes, on May 25, Venus will reach the pinnacle of its current evening apparition.  It will then be setting more than three and a half hours after local sunset.  For New York City, for example, that corresponds to 11:44 p.m.

Interestingly, many astronomy books state flatly that you can't see Venus in the middle of the night. But thanks in part to Daylight Time, those places close to the western flank of a particular time zone will indeed be able to see Venus at . . . or even beyond the "witching hour."  From Pittsburgh, Venus won't set until 12:07 a.m., while from Terre Haute, Indiana-near the boundary line between Eastern and Central time-Venus won't set until 12:33 a.m. EDT!