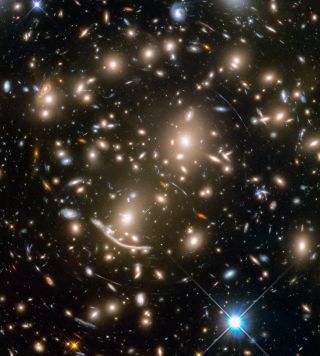 As Star-Lord and his team head to the big screen this weekend to guard a galaxy in the Marvel universe, new images from the Hubble Space Telescope remind us that there are far more galaxies in our own universe without any superheroes to protect them from evil villains.

"Much like the eclectic group of space rebels in the upcoming film 'Guardians of the Galaxy Vol. 2', NASAs Hubble Space Telescope has some amazing superpowers, specifically when it comes to observing innumerable galaxies flung across time and space," NASA officials said in a statement that was published along with some incredible new views of galaxies in deep space.

A gorgeous galaxy cluster named Abell 370 stars in the images, which NASA released on Thursday (May 4). The cluster contains hundreds of galactic neighbors bound together by their own gravitational pull. Abell 370 lies about 4 billion light-years away in the constellation Cetus (the Sea Monster). But you can also see more distant galaxies that lie behind the cluster. [The 10 Must-Read 'Guardians of the Galaxy' Stories]

The background galaxies in appear cloudy and distorted due to an effect called gravitational lensing. All that gravity from the hundreds of galaxies inside the cluster bands the light that comes from the other side, causing those distant objects to appear warped.

"These far-flung galaxies are too faint for Hubble to see directly, NASA officials said in the statement. "Instead, the cluster acts as a huge lens in space that magnifies and stretches images of background galaxies like a funhouse mirror." One of these warped galaxies seen in Hubble's new images is nicknamed "the Dragon" for its shape and size.

Since its launch in 1990, the Hubble telescope has provided the deepest views of the cosmos we've even seen. Unlike the superpowers of the heroes in the Marvel realm, Hubble's superpower is far from science fiction. So if and when you decide to go see "Guardians of the Galaxy Vol. 2" (which hits movie theaters Friday, May 5), maybe you'll take a moment to stop and think about the countless defenseless galaxies in the real universe that Hubble is keeping an eye on.