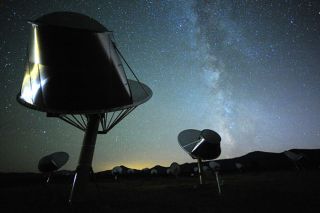 The search for intelligent life in the universe will see rapid advancements over the next two decades, thanks largely to improvements in computing power that could make it possible to survey at least a million star systems, according to Seth Shostak, a senior astronomer at the SETI Institute.

Shostak discussed the state of SETI efforts (SETI stands for search for extraterrestrial intelligence) during a hearing Wednesday (April 26) before the U.S. House Committee on Science, Space and Technology. He was on Capitol Hill with three other scientists to testify on the subject of advances in the search for alien life.

Among other initiatives, the SETI Institute is searching for signs of artificial radio signals in the universe that may have been produced by an alien civilization. [Are We Alone? The Search for Life & Odds of E.T.]

How likely is it that scientists will find signs of life in those million star systems? Shostak's response reflected both an optimistic and a realistic outlook: "I bet everyone a cup of coffee that we will find something," he said, before quickly adding, "I may have to buy a lot of coffee."

Shostak has said previously he thinks signs of intelligent life will be found by 2040.

The improvements that will so greatly advance scientists' ability to search for signs of intelligent beings in the universe are largely twofold, Shostak said. First, as computer processors continue to follow Moore's law, computer processors will steadily get smaller, cheaper and faster. Thus, SETI scientists will be able to write computer software that simultaneously sifts through data collected by radio antennas as the antennas capture signals from multiple star systems.

"Instead of looking at one star at a time, which is what we've done … you could look at tens, hundreds, even thousands of stars at a time with enough computer-processing capability," he said. "And of course that capability is coming down the pipe."

The second improvement Shostak noted is that SETI scientists are working on using machine learning in their search for extraterrestrial communication signals. Now, scientists program computers to search for "one kind of pattern" in the radio data that could indicate an artificially created radio signal, he said. But that approach is extremely limiting — like a person who can hear only one note while listening to a symphony. Machine learning could "broaden the kind of thing [we] can recognize" in the radio signals, which would "speed up the search," he said.

Shostak also discussed the SETI Institute's efforts to search for artificial radio signals among the seven planets in the TRAPPIST-1 system, the discovery of which was announced in February. The seven planets orbit a single red dwarf star, and all of them orbit closer to the star than Mercury orbits the sun. As many as three of the seven planets could be habitable, according to Adam Burgasser, a professor of physics at the University of California, San Diego, and a member of the team that discovered the seven planets. Burgasser also appeared before the committee with Shostak.

The short distance between the worlds in the TRAPPIST-1 system means that if life emerged on one planet, it could have been spread to the other planets via meteoroids. What's more, if intelligent life formed there, it would have likely colonized the other planets, so the SETI scientists are looking for communications sent between planets.

"This could be a mini federation of planets, if you will," he said. "We are using our Allen Telescope Array to look at the Trappist-1 system and we … wait for planets to line up and then see if there's any difference in the amount of radio radiation coming our way. Because at that point, you're looking down a communication pipeline between these planets."

The other three panelists focused mainly on efforts to search for "simple life" in the universe, meaning life-forms that aren't identified based on their technology. Scientists are now eager to study the planets in the TRAPPIST-1 system using telescopes set to come online in the next five to 10 years. Those telescopes could find chemical signatures of life in the atmospheres of those planets. The TRAPPIST-1 planets, Burgasser said, are just a few examples of recently discovered, potentially habitable planets located relatively close to Earth, that will provide excellent subjects for those studies.

"This and other recent discoveries represent the beginning of an era of exoplanet exploration that, in the next five to 10 years, will allow us to identify truly habitable worlds and possibly life beyond Earth," Burgasser said. "These transformative advances, addressing one of humanity's most persistent questions — 'Are we alone?'— are fully achievable through a diverse portfolio of research programs led by U.S. scientists and supported by federal funding to NASA, [the National Science Foundation] and other science agencies."

The four members of the panel as well as the committee members also discussed the James Webb Space Telescope (JWST). The telescope, set to launch in 2018, could analyze the atmospheres of some alien planets in greater detail than any current telescopes. Beyond JWST, the panelists mentioned the upcoming Transiting Exoplanet Survey Satellite (TESS), which is expected to identify hundreds to thousands of new planets around other stars, Burgasser said. The Wide-Field Infrared Survey Telescope (WFIRST) and large ground-based telescopes set to come online in the 2020s, will also improve the study of exoplanet atmospheres, the panelists said.

"Our generation is the first in human history to know that there are worlds beyond our solar system. Will the next generation know whether life exists on those worlds?" Burgasser said. "We have the opportunity and the responsibility to continue our nation's legacy of discovery so that our children and grandchildren can search for life in new ways."