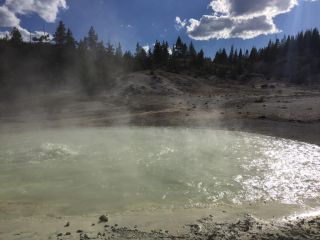 The hot springs of Yellowstone National Park may be extreme environments, but they are host to a diversity of microbes that could shed light on the evolution of life on Earth and, perhaps, what lurks on distant planets.

While photosynthetic life cannot tolerate the high temperatures of hot springs, microorganisms that are chemosynthetic — meaning they rely solely on chemicals, rather than sunshine, as their energy source — do well there. Many of these peculiar microbes are believed to be the closest modern relatives to the earliest life on our planet.

"Chemosynthetic microorganisms provide useful models for understanding how life might persist in extraterrestrial systems, like the subsurface of Europa, for instance, where light energy will not be available but abundant sources of chemical energy might be," said Daniel Colman, a geomicrobiologist at Montana State University in Bozeman. [Blood Moon Over Yellowstone's Old Faithful Wows Photographer]

In 2014, Colman and his colleagues collected samples from chemosynthetic microbial communities in 15 hot springs in Yellowstone National Park. Hot springs are complex environments, where nutrient availability varies widely, even within the same hot spring. Colman analyzed how these variations might shape the kinds of chemosynthetic communities that might exist at any given spot.

Colman and his team detailed their findings in the paper "Ecological differentiation in planktonic and sediment-associated chemotrophic microbial populations in Yellowstone hot springs" in the journal FEMS Microbiology Ecology.

The researchers looked at microorganisms that were either planktonic, that is, free-swimming, or those living in sediment, and then examined the chemistry of the water and the mineralogy of the sediments.

They focused on substances known as oxidants, which help organisms capture energy by stripping electrons from nutrients. Whereas humans and many other organisms rely on oxygen to act as their primary oxidant, chemosynthetic microbes rely on other oxidants that provide less energy, such as forms of iron and sulfur that are oxidized (oxidized materials have lost electrons).

The scientists found that planktonic communities in Yellowstone were dominated by bacteria that are microaerophiles, which need oxygen to survive but at concentrations lower than is present in Earth's atmosphere. In contrast, sediment communities in Yellowstone were dominated by chemosynthetic microbes that rely on inorganic substances such as elemental sulfur or oxidized iron as their oxidants.

These findings shed light on how and why hot spring microbes in sediments differ from those in the water. Microbes living in water that has been exposed to, and mixed with air, can use oxygen from the air as their oxidant, while microbes in sediments that are likely oxygen-poor have to make do with other kinds of oxidants. The researchers expect that early life on Earth was limited by the availability of oxidants and had to make do with what was around them. The same might be true of life elsewhere in the Universe.

"Understanding the present-day distributions of microorganisms as they relate to environmental factors can provide an idea of how life evolved in response to changing environments over Earth's history and over the history of life's evolution," Colman said.

Colman is especially interested in the subsurface microbial communities at Yellowstone, since they may, in some ways, resemble extraterrestrial settings on places like Europa. Nothing is known of the nature, or even existence of, a shallow, high-temperature subsurface biosphere in Yellowstone National Park, since drilling of any kind is prohibited on national park lands.

NASA is interested in this research because developing an understanding of life in the hot springs of Yellowstone has the potential to shed light on how life may thrive in extraterrestrial environments that are similarly high in temperature and pressure and low in nutrients, Colman said. "These environments are understudied in astrobiology research, but hold tremendous promise as accessible analogs for extraterrestrial habitable environments that might be present on Enceladus, Mars, or Europa," Colman said.

For instance, just as the sediments of Yellowstone's hot springs are low in oxygen, "we would expect that life in other planetary body subsurface environments would likely be plagued by a chronic lack of oxidants, like oxygen, and would need to make do with oxidants that provide less energy," Colman said.