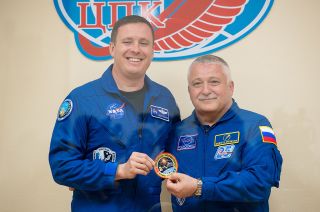 The two latest crewmates to arrive at the International Space Station are steeped in space history — at least symbolically.

NASA astronaut Jack Fischer and Roscosmos cosmonaut Fyodor Yurchkhin took up residency on the orbiting outpost on Thursday (April 20), beginning a five-month stay. Now members of the station's Expedition 51 crew, they lifted off to the orbital complex as the crew of Russia's Soyuz MS-04 spacecraft.

To represent their launch together, Fischer and Yurchikhin worked with artists to design two distinct mission patches, one official and one unofficial, but both drawing inspiration from the emblems of historic past spaceflights. [In Photos: Expedition 51 Mission to the Space Station]

"Since my youngest age, I liked the space program. I liked everything about space," said Yurchikhin, 58, who is on his fifth spaceflight.

"When I was six, there actually is a picture of me and my siblings — we are right next to the Saturn V [on display at Johnson Space Center in Houston]. I just looked up at this ginormous rocket and fell in love with the whole idea," said Fischer, 43, a first-time flier and the 550th person in history to enter Earth orbit.

Lifting off on Thursday from the Baikonur Cosmodrome in Kazakhstan on a six-hour flight to the station, Fischer and Yurchikhin wore Sokol pressure suits decorated with their respective space agency's logo, country flag and, sewn to their right shoulder, their official Soyuz MS-04 patch.

The circular blue and yellow insignia, created with the help of Dutch artist Luc van den Abeelen, was directly inspired by the iconic emblem for Apollo 12, the second mission to land astronauts on the moon in November 1969.

Like the nearly 50-year-old patch, the Soyuz MS-04 badge features a classic sailing ship trailing a stream of stars. For Fischer and Yurchikhin, the vessel symbolized the dream of flying in space and was a motif that also influenced their choice of names for their own ship, "Argo," christened for the seafaring Argonauts of Greek mythology.

The Apollo 12 crew also saw similarities with the story of the Argonauts in an early draft of their patch, as described by moonwalker Alan Bean in the 1985 book, "All We Did was Fly to the Moon" by Dick Lattimer.

"The ship had been one similar to the one Jason and the Argonauts had used to search for the Golden Fleece and we didn't feel that was American enough," said Bean, who after retiring as an astronaut became a professional artist.

On the Apollo 12 patch, the final clipper ship was depicted rounding the moon, above where Bean and Pete Conrad, the mission's commander, were to land their lunar module, "Intrepid." On the MS-04 patch, the ship is set against a depiction of a space station, as sketched by Soviet rocket scientist Konstantin Tsiolkovsky in 1883.

"Our unofficial logo honors the Apollo-Soyuz mission, and the handshake in space in 1975," said Fischer in a press conference on Wednesday (April 19).

Launched in July 1975, the Apollo-Soyuz Test Project was the first joint space mission between the U.S. and Russia, a partnership that eventually led to both countries working together on the International Space Station.

"The Apollo-Soyuz flight was a significant milestone in the relationship of the two countries," said Yurchikhin.

The crew's unofficial patch — or rather, patches — directly mimic the two designs of the U.S. and Russian insignia for the Apollo-Soyuz Test Project. Created with the assistance of Houston-based artist Blake Dumesnil, the primary patch keeps the general placement and look of the Soyuz on the Robert McCall-derived 1975 patch, but replaces the Apollo spacecraft with the International Space Station.

"It has a saying on it, 'ОДНА КОМАНДА' — 'One Team' — 'Exploring Together,'" described Fischer. "And that reminds of us of the huge team of thousands of people across the globe that makes spaceflight a reality."

"We are extremely grateful to be part of that team," Fischer said.

See more of the Soyuz MS-04 official and unofficial mission patches at collectSPACE.