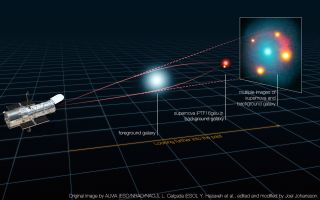 This diagram shows how the supernova iPTF16geu got a visual boost from a galaxy that came between it and the Hubble Space Telescope. The gravity of the intervening galaxy warped the light coming from the supernova, sending it to Hubble split into four images and magnifying it by more than 50 times.
(Image: © Joel Johansson)

This supernova was ready for its close-up — times four!

Researchers have spotted an extremely rare phenomenon in the sky: A galaxy was positioned perfectly to give Earth a peek at a distant supernova, magnified 50 times. The alignment also split the supernova's light into four little images, and because of the particular type of supernova, researchers can use the differences among those four images to learn more about the expansion of the universe.

The blooming apparition of the supernova caught Ariel Goobar's eye while the scientist was involved in a sky survey with the Palomar Observatory in California, he told Space.com in an email; the survey had been running for a few years looking for lights that came and went in the sky, called transient phenomena. [See more images of the quadrupled supernova explosion]

"What caught my immediate attention on this one is that it was way too bright considering its distance to us — it shone 50 times more intensely than it should, had there not been something amplifying the light," said Goobar, lead author of the new work and a researcher at Stockholm University.

Once Goobar determined that the brightness and apparent distance wasn't a measurement error, he realized it must be caused by a phenomenon called a gravitational lens, he said. In this kind of situation, instead of getting in the way, a galaxy in between the telescope and supernova can actually focused a sharper view of the faraway object. You can see a video overview of how gravitational lenses work here.

"The huge amplification of the supernova light requires a remarkable alignment of the lens in between the supernova and us — the odds are something like one in a hundred thousand!" Goobar said. [Supernova Photos: Amazing Views of Star Explosions]

After the discovery, researchers rushed to turn other telescopes toward the supernova blast, as the glow might last for only a matter of weeks. The director of the Hubble Space Telescope offered discretionary observation time that had been set aside, reserved for unexpected discoveries, and the Very Large Telescope in Chile offered similar resources. Astronomers at the Keck Observatory in Hawaii offered some of their assigned observing time to the project, as well, Goobar said.

The supernova happens to be a type of star explosion called 1A, which shines at a consistent brightness and can be used to judge distances across the universe. Because the supernova was of this type, researchers could calculate that the light traveled 4.3 billion years to reach the telescopes. Along the way, the light got a boost from a galaxy positioned between Earth and the supernova.

Objects' gravity warps space-time according to Einstein's general theory of relativity, and the more massive the object, the greater the warping effect. Like curved lenses made of glass bend the light that passes through them, this galaxy's gravitational pull bent the light of the supernova as it passed by. And the galaxy happened to be perfectly aligned to focus four different streams of the supernova's light into Earth's view. It is the first time such a "standard candle" type 1A supernova has been split into multiple images by a gravitational lens, Goobar said.

In fact, that alignment is about 1000 times less likely than one that would provide a mere 5 times magnification, Goobar said — so why have they seen this arrangement rather than a less extreme one?

"It is like a perfect bullseye, being much more difficult than anywhere further from the center of the target," Goobar said.

The arrangement raises questions about whether there's some reason such an intense amplification is more likely than thought, and the structures within the galaxy, like black holes or a dense network of stars, that enhance the lens effect. It also provides a rare opportunity to learn more about the way lenses bend light and the way space-time might have been warped along the paths those light beams traveled, Goobar said.

"Since the various images follow different paths, there is no reason for them to reach us at the same time," Goobar said. Because the type of supernova and the light it gives off is so well-understood, "we can then compare the light curves for the four images and try to estimate the time difference between them, which encodes information on the scale of the universe.

"This information is very precious since it can be used to measure the expansion rate of the universe, i.e. the Hubble Constant," Goobar added. "As we are about to upgrade the surveying capability at Palomar and make it 10 times more efficient, we are very hopeful that we will be finding new, similar systems in the coming years, which bodes well for the prospects of improving the measurement of the expansion rate of the universe."

The new work was detailed today (April 20) in the journal Science.