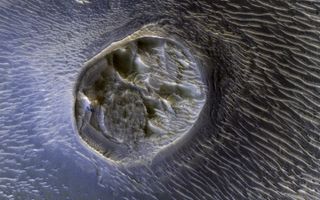 The 0.25-mile-wide (0.4 kilometers) mesa lies in Noctis Labyrinthus, a fractured region at the western end of the gigantic Valles Marineris canyon system, NASA officials said. (Valles Marineris is about 2,500 miles, or 4,000 km, long, covering about 20 percent of the Red Planet's circumference.)

"Heavily eroded, with clusters of boulders and sand dunes on its surface, this layered mesa is probably comprised of sedimentary deposits that are being exhumed as it erodes," NASA officials wrote in an image description last Wednesday (April 12). "The layers themselves are visible as faint bands along the lower left edge of the mesa." [See more awesome Mars photos by MRO]

MRO captured the photo using its High Resolution Imaging Science Experiment (HiRISE) camera, which is capable of picking out features the size of a coffee table on the Red Planet's surface. The scale of the image is 19.7 inches (50 centimeters) per pixel, and north is up, NASA officials said.

The long-lived spacecraft has been searching for evidence of past water activity on Mars, studying the planet's geology and climate and scouting out potential landing sites for future robotic and crewed missions, among other science work. MRO also serves as a key communications relay for robots on the Martian surface, such as NASA's Opportunity and Curiosity rovers.