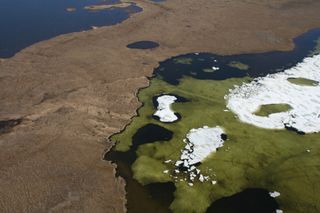 It is thought that animal life first arose during the Ediacaran Period, between 635 and 541 million years ago, but these organisms bore little resemblance to the animals we know today. That's led some scientists to believe that they may not have been animals at all, and instead amounted to failed experiments in multi-cellular evolution.

The remains of these odd creatures, most of which have no evidence of a circulatory or digestive system, largely vanished from the rock record at the start of the Cambrian Period, 541 million years ago. Piecing together a picture of the Ediacaran environment is key to understanding more about these enigmatic macro-organisms. One research team is revealing the paleo-environment of this time period by studying the remote Khatyspyt Formation, a series of sedimentary rocks above the Arctic Circle in Siberia that were laid down when the area was a shallow marine shelf environment. [Tiny Life: Photo Evidence of Early Animals]

Geologist Huan Cui of the University of Wisconsin-Madison and colleagues discuss their findings in a recent paper, "Redox-dependent distribution of early macro-organisms: Evidence from the terminal Ediacaran Khatyspyt Formation in Arctic Siberia," published in the journal Palaeogeography, Palaeoclimatology, Palaeoecology.

The Ediacaran animals were soft-bodied, without shells or skeletons, and their fossils are most typically preserved as molds or casts, like footprints in the sand. Ediacaran fossils have been discovered in fine-grained sedimentary rock such as sandstone, which does a poor job of preserving paleo-environmental information. In the Khatyspyt Formation, however, some of the fossils are entombed in well-preserved limestone, which does a good job of recording the ancient world of these creatures.

Paleo-environmental changes through the rock succession can be studied by chemostratigraphy, which looks at the changes in the chemical makeup of the rocks over time as they formed. The scientists looked at the minerals in these rocks, including pyrite, or "fool's gold," in order to measure the sulfur isotope composition through 130 vertical meters of the Khatyspyt Formation. Pyrite is studied as it gives clues to the microbes that produced it, and to the availability of both food and sulfate, which are required to fuel their metabolic activities.

Rocks at the bottom of the pile are older than those at the top, so studying how the sulfur chemistry changed through the rock succession informed Cui and his colleagues about environmental variations over time. These researchers found a dramatic anomaly in the abundances of sulfur isotopes (flavors of atomic sulfur that differ in the number of neutrons that add weight to the element) in the various layers, with the highest concentration of the heavy (having more neutrons) isotope in the upper reaches of the formation and the lowest at the bottom of the sedimentary pile

The sulfur isotope anomaly lines up surprisingly well with the preserved fossil record of Ediacara biotas. The lower 45 meters of rock are mostly devoid of fossils, while the upper regions, where the heavy sulfur isotope concentration is highest, is teeming with them. The scientists speculate that the light sulphur isotopes at the bottom of the rock succession are most likely due to the proliferation of anaerobic microbes that lived in the anoxic (oxygen-free) water in the basin. These microbes would have changed the chemistry of the water by producing toxic hydrogen sulfide, which would make it uninhabitable for animal life.

"We speculate that the strongly negative (sulfur isotope) values at the bottom of the succession relate to anoxic conditions when the microbes could live in the water column," explained the principal investigator, Jay Kaufman. "Since the process forms sulfide, we suspect that it built up in the deep water column resulting in euxinic (sulfidic) conditions."

The euxinic water created as a result of these anaerobic microbes has too much sulfide and too little oxygen for animal life to exist, which explains why no animal fossils were found in the lower part of the formation. "These euxinic conditions might have been enhanced by chemical weathering, where sulfates were brought into the oceans, which thus became fuel for the microbes," said Cui.

At 45 meters above the base of the Khatyspyt Formation, environmental conditions apparently changed, and the Ediacara fossils start to appear. It is at this point that the sulfur isotopes become progressively heavy, which may have been the result of less weathering and hence less sulfate available for the microbes to use.

The change from euxinic to non-euxinic conditions at the end of the Ediacaran Period allowed the Ediacaran animals to colonise the now more oxidized and habitable ocean, despite an overall oxygen level in the atmosphere and oceans that was far less than today's.