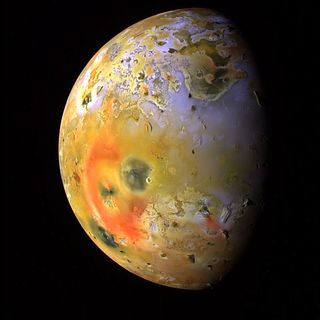 This global view of Jupiter's moon, Io, was obtained during the tenth orbit of Jupiter by NASA's Galileo spacecraft on 19 September 1997 at a range of more than 500,000 km (310,000 miles). Io (which is slightly larger than Earth's moon) is the most volcanically active body in the solar system. Colors are enhanced.
(Image: © NASA/JPL/University of Arizona)

Anybody wondering what Earth was like 4 billion years ago should cast an eye toward Jupiter's hypervolcanic moon Io, a new study suggests.

Io is the most volcanically active object in the solar system, dissipating its massive stores of internal heat via intense eruptions that cover the entire moon with about 0.4 inches (1 centimeter) of lava every year. Earth probably went through a similar phase in its youth, back before the planet cooled enough for plate tectonics to start up, researchers report today (Sept. 25) in the journal Nature.

Earth formed from the fusion of many small, rocky "planetesimals" about 4.5 billion years ago. These collisions generated lots of heat, as did the subsequent separation of Earth's metallic core and the decay of radioactive elements. As a result, the ancient Earth harbored far more internal heat than it does today — perhaps five to 10 times more, scientists think. [Amazing Photos of Jupiter's Moon Io]

However, the planet's lithosphere — its rigid outer shell, composed of the crust and upper mantle— was relatively thick and cool in those early days. That shouldn't be the case if plate tectonics were the main means of dissipating interior heat back then, as it is now, researchers said.

Instead, the early Earth may have worked more like Io, where heat flows to the surface through volcanic "pipes" in huge quantities. The moon is tugged so hard by Jupiter's powerful gravity that it currently transports about 40 times more internal heat than Earth does despite being just 30 percent as wide as our planet.

"The heat pipe [idea] explains that, by allowing heat through the lithosphere in particular places — the pipes — which allows the rest of the lithosphere to be thick and cold and strong," said study lead author William Moore, of Hampton University in Virginia. "So you can resolve the paradox by proposing this different mechanism of heat transport."

The chief alternative to the heat-pipe model developed by Moore and study co-author Alexander Webb of Lousiana State University is a souped-up version of plate tectonics, in which Earth's enormous lithospheric plates simply moved faster and transported more heat long ago.

But a hotter interior would likely have generated more molten rock, producing thicker, more buoyant plates that would have taken longer to cool down enough to dive back into Earth's mantle, Moore said.

"Somewhat counterintuitively, the hotter things get, it seems like the slower plate tectonics should run, and actually the worse it is at transporting heat," Moore told SPACE.com. "So there are geophysical problems with just making plate tectonics run faster."

"You do not see that anywhere today at the surface of the Earth, because plate tectonics does not let anything sit around for 100 million years before it starts beating up on it," he said.

The heat-pipe system was likely in effect from the time Earth's surface solidified until about 3.1 billion years ago, when the planet switched over to plate tectonics relatively quickly, Moore said. (As Earth cooled, the amount of volcanism dropped off dramatically, the idea goes; the lithosphere then got thinner and thinner until it finally broke, forming plates.)

Life is thought to have arisen on our planet about 3.8 billion years ago, so it may have bloomed into existence on an incredibly volcanic planet. And that would make perfect sense, Moore said. [7 Theories on the Origin of Life]

"This interaction between hot rocks and water is really good for life," he said. "It liberates both thermal energy and chemical energy from the rocks, as well as pulling essential nutrients like phosphorus and sulfur out of the rock phase and putting them into the water."

The new hypothesis could have applications far beyond Earth. Moore suspects that every rocky planet goes through a heat-pipe phase during its evolution, the duration of which depends on its size (because larger worlds take longer to cool down than smaller planets).

If this is indeed the case, then plate tectonics may not play much of a role on so-called "super-Earth" planets, which are roughly two to 10 times as massive as Earth. In the last few years, astronomers have discovered a number of super-Earths that may be capable of supporting life.

"We should probably not expect to find these large terrestrial [alien] planets in plate-tectonic mode, but to find them in a much more long-lived heat-pipe mode," he added. "So they'd be much more like super-Io rather than super-Earth."