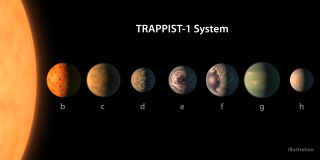 A new model suggests that TRAPPIST-1e, which has liquid water on its surface, is the most likely in the seven-planet system to be habitable.
(Image: © NASA/JPL-Caltech)

Tucked between a boiled-away desert and a giant snowball, an alien world called TRAPPIST-1e may be the only habitable planet in a newly discovered batch of seven, according to a new climate model.

When researchers announced the discovery of seven planets that closely orbit the cool red star TRAPPIST-1 in February, there was a rush to learn more about the little rocky worlds and find out if any might be habitable. One of the first scientists to model the worlds' potential climates in depth was Eric Wolf, a researcher at University of Colorado, Boulder. His model, along with others still to come, will paint a clearer picture of what the system's planets could actually be like.

Wolf modeled three planets around TRAPPIST-1 and tested different potential atmospheres to see whether any let liquid water exist on a planet's surface. He found that, in his simulation, only one of the planets listed as potentially habitable would be able to keep liquid water. [Exoplanet Tour: Meet the 7 Earth-Size Planets of TRAPPIST-1]

In particular, Wolf investigated planets d, e and f around TRAPPIST-1, which lies about 39 light-years from Earth. He found that planet d orbits too close to its star, building up a thick atmosphere of water vapor that heats the planet even further and boils the rest of the water off — a runaway greenhouse effect that guarantees the planet winds up too hot and dry to host life over time. Planet f, by contrast, is too far from its star, making it a snowball; any surface water would be frozen solid, and in the model, no combination of gases in the planet's atmosphere seemed to keep it warm enough, Wolf said.

"So that leaves us with planet e as the one real chance of having a temperate, habitable, Earth-like climate," Wolf told Space.com.

To reach that conclusion, Wolf used a modified atmospheric model originally calibrated to simulate Earth's climate. TRAPPIST-1's planets, though Earth-size, exist in very different conditions than Earth does — the seven planets huddle close to their ultracool red dwarf star, and have full orbits lasting between 1.5 and 20 days (compared with Earth's 365.26 days). Because they are so close to their star, the planets likely orbit with one side always facing inward. The star gives off different wavelengths of light than the sun does; TRAPPIST-1 is much redder, and emits longer wavelengths, including those in the near-infrared.

For this analysis, Wolf assumed that water was freely available on the surface of the planets. He found that with an Earth-like atmosphere, about 20 percent of planet e's surface isn't icy — it would look like an eyeball, with a warm, melted spot facing the star — and that you could duplicate Earth's temperature by adding much more carbon dioxide to the atmosphere (or, various combinations of nitrogen and carbon dioxide could offer that insulation).

To compensate for planet f's distance from the star and make it warm enough for liquid water, he tried adding about 30 bars pressure of carbon dioxide — approximately 30 times the pressure of Earth's entire atmosphere at sea level. However, planet f would still be too cold to host life — so cold, in fact, that the gas would start condensing and fall out of the atmosphere.

The farther-out planets would fare even more poorly, freezing any available water and becoming snowballs as well. Planet d would be too hot to hold water regardless of its atmosphere's thickness and composition, according to the model, and so would the closer-in planets. Although the original paper announcing the system a month ago, published in the journal Nature, posited that planets e, f and g could host liquid oceans, Wolf's more complex model suggests that f and g would be too bitterly cold.

"The main take-home point is that TRAPPIST-[1]e is the real winner here," Wolf said. But he's eagerly awaiting more models; as with modeling climate change on Earth, it will take many different techniques to come to a consensus about which planets' atmospheres could allow for liquid water.

"We need to intercompare between numerous models to come to a consensus that our models are doing the right thing, and that we can get some convergence of our results to make judgments about these planets," he added.

There are many variables that affect a planet's environment, and various models handle those variables in different ways. Wolf's model folds in what effect different gases in the atmosphere would have, the cooling impact of clouds and the way radiation heats the planet, among many other considerations. It also simplifies the way the ocean works; in reality, ocean currents could reduce the sea-ice coverage of the planet by transporting heat from the warmer dayside to the colder nightside. Other climate models might make different choices for each of those calculations, and they're always improving as researchers learn more about how a planet's environment works. [TRAPPIST-1 is 'Most Incredible Star System to Date' - 5 Amazing Facts]

For TRAPPIST-1d, e and f, Wolf modeled the temperature across the planets while trying out particular atmospheres. For planet e, he tested cold, temperate and hot scenarios. Then, he graphed the heat that would be released from each planet with a given atmosphere, as well as the brightness of light reflected off the surface of the planet in each part of the orbit. Researchers will be able to compare those models to real data as it comes in.

"If we can get these observations and compare them to our model results, we might be able to make some estimates of what the atmosphere of the planet is like," Wolf said. Making these models in advance helps researchers prepare for that data, and also suggests which might be most productive to investigate further, he added. In the future, he and his colleagues plan to simulate the spectra of light that would come back from the planets as well, letting researchers match future observations with particular atmospheres.

"It's a really nice paper," said Anthony Del Genio, a researcher at NASA's Goddard Institute for Space Studies who was not involved in the study. "To my knowledge, Eric [Wolf] is the first one to do this type of study for the TRAPPIST-1 system — certainly, he's the first one to do a 3D study."

Del Genio is referring to a 3D climate model, which portions off the planet into vertical columns and tracks how conditions change across the columns, whereas a one-dimensional model examines just one column of atmosphere and surface. 3D models can incorporate more nuance in natural phenomena, and can handle differences in the dayside and nightside of the planet, which is particularly important for orbs like the TRAPPIST-1 planets that always face the same side toward the star.

Del Genio is looking forward to what other models might reveal, particularly details about planets d and f. Various treatments may provide different results for the planets' potential habitability, he said. But for now, Wolf's study offers a good suggestion of what to look for as researchers turn more powerful telescopes on the star system.

"He's really laid the groundwork for characterization of this system, and I'd say, if you are an astronomer thinking of observing the TRAPPIST system to characterize the atmosphere, that as a result of this study, you know which planet you want to go after first," Del Genio told Space.com.