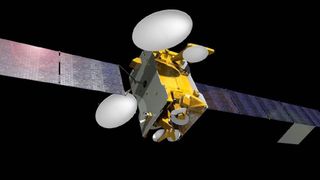 Artist’s illustration of the SES-10 communications satellite in Earth orbit. The satellite is scheduled to launch March 30, 2017, atop a SpaceX Falcon 9 rocket whose first stage has already flown to space once before. The liftoff will be SpaceX’s first that employs a used booster.
(Image: © SES)

When it comes to innovation, satellite operator SES aims to practice what it preaches.

The Luxembourg-based company bought the first ride on a previously flown booster; its SES-10 communications satellite is slated to lift off at 6:27 p.m. EDT (2227 GMT) today (March 30) aboard a SpaceX Falcon 9 rocket whose first stage launched an orbital mission last year. (You can watch today's liftoff live here on Space.com, courtesy of SpaceX.)

But the firm’s drive toward innovation doesn’t stop there. SES also plans to use the satellite, along with 65 others in orbit, to offer customers a new way of doing business. [Satellite Quiz: How Well Do You Know What's Orbiting Earth?]

The SES network currently includes 53 satellites in geostationary orbits about 22,000 miles (35,400 kilometers) above Earth as well as the 12-member O3b network, which is in medium Earth orbit about 5,000 miles (8,000 km) above the planet.

The idea is that a customer would come to SES with a plan for what it wants to do, and SES would offer the technical services to make that happen using geostationary satellites, the O3b satellites or a combination of the two.

"We're not actually linking between the two orbits … but we are looking to see whether that would be appropriate for the next generations of satellites," Halliwell said.

Much like SpaceX is upending the launch industry, the satellite industry is poised for similar disruption with upcoming mega-constellations of small satellites, such as OneWeb, the latest project from O3b founder Greg Wyler.

OneWeb, which last month announced plans to merge with Intelsat, aims to provide high-speed internet services worldwide within the next decade.

The merger with Intelsat, which currently operates a fleet of 54 geostationary satellites, is "part of the larger vision of bridging the digital divide by 2027," Wyler said. "We're getting the pieces in place to accomplish that goal."

"It gives Intelsat customers an upgrade path that's never been done in satellites before, where their services will continue to improve year after year," Wyler said in an interview last month. "It's kind of a new concept in satellites, where your services get faster over time.

"You'll know from the experience, but you won't have to do anything," he added. "It will enable a smooth upgrade path for the customers … similar to when your cell operator moves you from 2G to 3G to 4G to LTE and eventually 5G."

SpaceX also plans to build and operate a 4,000-plus-member satellite network for high-speed internet, but the company has not yet released details about the project.

Halliwell said he thinks the new projects will have an impact on the geostationary systems as well.

SES-10 will replace two other SES satellites to provide TV, internet and other services to Latin America.