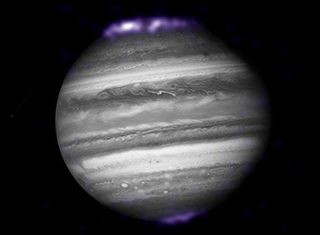 NASA's Chandra X-ray Observatory has captured the largest data set yet of Jupiter's colorful lights called aurora, yielding a pretty picture that could help solve some mysteries about the phenomenon.

The phenomenon is similar to the Northern Lights seen on Earth, thought on a much larger scale.

"Jupiter has auroras bigger than our entire planet," said Randy Gladstone of the Southwest Research Institute in San Antonio, Texas. In a NASA statement today, Gladstone called the purple rings in a new colorized image "Northern Lights on steroids. They're hundreds of times more energetic than auroras on Earth."

Unlike Earth's auroras, Jupiter's hyper-auroras never stop. "We see them every time we look," Gladstone said.

On Earth, the most intense auroras are caused by charged particles unleashed in solar storms. But Jupiter generates its own lights, Gladstone explained. The giant planet turns on it axis once every 10 hours and drags its planetary magnetic field around with it. This spin produces 10 million volts around its poles.

"Jupiter's polar regions are crackling with electricity," says Gladstone, "and this sets the stage for non-stop auroras."

Jupiter's volcanic moon Io feeds particles of oxygen and sulfur into the Jovian system. The particles become charged, contributing to the lights.

But scientists don't know exactly how volcanic exhaust meanders from Io out through Jupiter's magnetosphere and back to Jupiter's poles. "We're still trying to figure it out," Gladstone said.

There's another mystery: There is an X-ray "pulsar" inside Jupiter's northern auroras. Sometimes Chandra sees it, sometimes not. When it's on, the pulsar emits gigawatt bursts of X-rays with a regular beat of 45 minutes. It might be solar powered.

"Maybe Jupiter's magnetic field, when it gets hit by a solar wind gust, rings like a bell with a 45-minute period," Gladstone speculates. "There are many other possibilities as well."

The new X-ray observations, made in February, are being matched with data collected from the Hubble Space Telescope, the FUSE satellite, XMM-Newton (a European X-ray observatory), the New Horizons spacecraft and many ground-based observatories.

"Jupiter's auroras have never been observed by so many telescopes at once," Gladstone said. "I'm really excited by these data, and the analysis is just beginning."