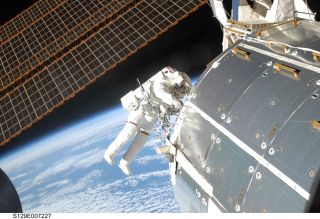 From power-supply issues to skin-protection concerns, the winners of NASA's Space Poop Challenge discussed all the details of their innovative spacesuit waste-disposal systems in a panel discussion about their responses to NASA's astronaut potty problem.

The challenge called on participants to design a device that would go inside a spacesuit, whisk waste away from an astronaut's body and keep the waste contained for up to 144 hours, without astronauts needing to use their hands. The challenge received more than 5,000 submissions from teams in 130 countries.

Steve Rader, deputy manager of NASA's Center of Excellence for Collaborative Innovation (CoECI), said the agency has long struggled with how to deal with human waste inside a spacesuit. He was one of the judges for the challenge and said picking the best submission was hard, in part because of the disgusting subject matter. [How to Pee in Space (and What to Do If the Toilet Breaks)]

"It wasn't just difficult because you can't un-see some things, but it was difficult because there were so many quality submissions as well," he said in a webcast today (March 28) hosted by HeroX, which partnered with NASA for the challenge.

Thatcher Cardon, who won the $15,000 top prize for his "MACES Perineal Access & Toileting System (M-PATS)" design, said that he thought through several ideas before coming up with his winning solution. (The designs have not been released to the public yet, and NASA is using them under an intellectual-property licensing agreement.)

"Skin care was the main problem in my mind," said Cardon, who is a U.S. Air Force colonel and commander of the 47th Medical Group at Laughlin Air Force Base in Texas. "Wherever you end up having the waste, it's really about the skin and whether or not it gets infected or irritated."

"In addition to skin infections, I was worried about urinary tract infections," Gonzales said on the webcast.

He added that he was astonished at how little power the system was allowed to use per the challenge guidelines. "The takeaway was they [NASA] have limited resources and they don't want us to waste them," he said.

Hugo Shelley, who took third place and won $5,000 for his "Spacesuit Waste Disposal System," said he was concerned about using typical skin-protection films, which he described as "very flimsy." These are especially concerning for a system that needs to work under extreme conditions, both on the launchpad and in zero gravity, Shelley said.

He added that space-waste problems are as old as the space program itself. He recalled the launch of Alan Shepard, the first U.S. astronaut in space, in 1961. Shepard's mission was only 15 minutes long, but delays on the launchpad and the lack of a waste-collection system eventually culminated in Shepard having an urgent "call of nature." With ground control's permission, Shepard urinated directly in his suit rather than leave the launch area and further delay the mission.

In some advice for future challenges, the winners said potential applicants should think carefully about how to convey the details of their designs to the judges. Cardon, for example, used the video portion of the challenge to show off a prototype, which would have been difficult to explain on paper, he said.

Rader also told potential applicants to avoid spending an undue amount of time describing the problem to be solved, but to focus instead on how their designs would overcome that challenge.