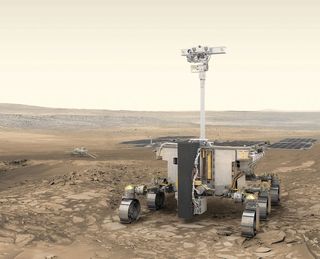 The life-hunting rover and its accompanying stationary platform will touch down at either Oxia Planum or Mawrth Vallis, two locations in Mars' northern hemisphere that harbor evidence of long-ago liquid water activity.

Neither site has been visited by a robotic explorer to date, though Mawrth Vallis was once a candidate for NASA's Mars rover Curiosity. (NASA ended up selecting the huge Gale Crater, inside which Curiosity landed in August 2012). [Photos: Europe's ExoMars Missions to Mars in Pictures]

"Both candidate sites would explore a period of ancient Martian history that hasn't been studied by previous missions," Jorge Vago, ESA's ExoMars rover project scientist, said in a statement.

A third site, called Aram Dorsum, had been under consideration as well. But Oxia Planum was selected for further study back in 2015, and Mawrth Vallis emerged as the second finalist after a recent two-day meeting attended by ExoMars team members and other Mars experts from academia and industry, ESA officials said.

"While all three sites under discussion would give us excellent opportunities to look for signatures of ancient biomarkers and gain new insights into the planet's wetter past, we can only carry two sites forward for further detailed analysis," Vago said.

Mission team members will continue studying the two finalist sites, assessing them from both a scientific and engineering perspective. This latter work will attempt to ensure that the ExoMars 2020 rover comes down in a safe, flat spot free of dangerous boulders. (Mission managers aim to guide the rover down inside a landing ellipse 75 miles long by 12 miles wide, or 120 by 19 kilometers.)

The final decision will likely be made about a year before the rover's planned 2020 launch, ESA officials said.

The rover and landing platform make up the second part of the two-phase ExoMars program, a project led by ESA with help from Roscosmos, Russia's federal space agency. The first part, which launched in March 2016, consisted of the Trace Gas Orbiter (TGO) and Schiaparelli, a landing demonstrator designed to prove out technologies required for the rover's 2021 touchdown.

TGO made it to orbit safely on Oct. 19, but Schiaparelli crashed that same day.

The ExoMars 2020 rover will study the habitability of Mars and search for signs of past or present life. Part of its work will involve drilling up to 6.5 feet (2 meters) beneath the surface to collect samples shielded from the harsh Martian radiation environment.

Instruments aboard the stationary landing platform, for their part, "will provide context imaging at the landing site, and long-term climate monitoring and atmospheric investigations," ESA officials wrote in the statement.

TGO is currently working its way toward its final science orbit. Later this year, the orbiter should begin searching the Martian atmosphere for methane and other gases that could be signs of Red Planet life. The spacecraft will also serve as a communications link for the ExoMars rover and its handlers back on Earth.