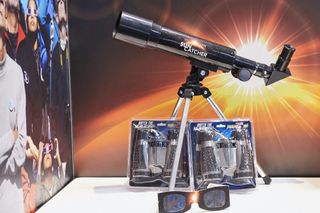 Most people know to never look directly at the sun, and that rule will apply during one of the most historic skywatching events of the century.

In case you hadn't heard, a total solar eclipse will be visible across the U.S. this summer. On Aug. 21, the moon will pass in front of the sun, casting a shadow on the Earth, in an event dubbed the Great American Solar Eclipse. (Although the total solar eclipse, meaning 100 percent of the sun is blocked, will be observable from only 12 states, the rest of the country will have the opportunity to see a partial eclipse.)

The easiest and cheapest way to protect your eyes is to wear a pair of solar eclipse glasses . They look similar to the 3D glasses given out at movie theaters, but instead of having one blue lens and one red lens, these glasses have two lenses that are dark with solar filters.

At Toy Fair 2017 in New York last month, Space.com found some solar eclipse glasses at a booth for Explore Scientific, a company that makes telescopes, microscopes, binoculars and other equipment for scientific exploration.

Using the glasses, which cost only a dollar a pair, may be the cheapest way to safely see the solar eclipse. But there are some other ways to view the event. For example, Explore Scientific also has binoculars and telescopes with built-in solar filters to allow for safe eclipse viewing.

The binoculars will sell for about $10. The telescope will come in two different sizes: A smaller and weaker version, called the Sun Catcher, will cost about $20, and a larger, stronger telescope — the Solar CF 400 — will cost about $40. Each telescope uses a solar filter behind the lens to block out intense light and harmful UV radiation from the sun. Explore Scientific has made the CF 400's filter removable, so people who buy it can use it to explore the cosmos even after the eclipse.

The company will not say how to remove the filter until Aug. 22 so that people do not unintentionally damage their eyes by attempting to watch the eclipse without a filter.

No matter which way you decide to safely view the eclipse, make sure to get your gear in advance. Here on Space.com, we'll be covering all the details of the eclipse.  Until then, start counting down the days!