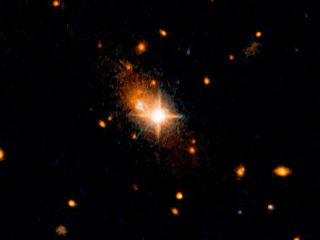 A supermassive black hole heftier than 1 billion suns has been ejected from the core of its galaxy by gravitational waves, a new study suggests.

The monster black hole has already zoomed 35,000 light-years away from its galaxy's center, farther than Earth and its sun are from the core of our own Milky Way. And the behemoth is currently traveling outward at 4.7 million mph (7.6 million km/h) — fast enough for the black hole to escape its galaxy completely in 20 million years, researchers said.

“We estimate that it took the equivalent energy of 100 million supernovae exploding simultaneously to jettison the black hole,” study co-author Stefano Bianchi, from Roma Tre University in Italy, said in a statement. [The Strangest Black Holes in the Universe]

The study team used NASA's Hubble Space Telescope to study the galaxy 3C186, which lies about 8 billion light-years from Earth. Hubble images revealed a quasar — the incredibly bright energetic signature of a supermassive black hole — within the galaxy.

That's not surprising; most if not all galaxies harbor supermassive black holes at their cores. But 3C186's quasar is not at its galaxy's core. Indeed, it's farther away from the center than any such black hole ever observed, researchers said.

Why did this strange object go rogue? Hubble data also revealed that 3C186 has arc-like features called tidal tails, which are generated by gravitational forces during galaxy mergers. Based on this observation and theoretical work, the study team thinks everything started with the collision of two galaxies 1 to 2 billion years ago.

The two galaxies' central black holes circled closer and closer to each other during the collision. As this happened, the black holes emitted gravitational waves — the ripples in space-time first proposed by Albert Einstein a century ago, and first detected directly last year by the Laser Interferometer Gravitational-Wave Observatory (LIGO) project.

This gravitational-wave emission occurred preferentially in one direction, the idea goes. When the two central black holes finally merged, this emission stopped, and the newly created leviathan rocketed off in the opposite direction.

The new study, which also incorporates data from the Sloan Digital Sky Survey and NASA's Chandra X-ray Observatory, will be published next week in the journal Astronomy & Astrophysics. You can read it for free on the online preprint site arXiv.org.