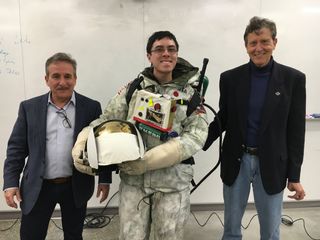 The first explorers on Mars will need a new kind of spacesuit, and a university-based team has taken a novel approach to design the equipment.

Researchers have set up a "collaboratory" at the University of California, Berkeley, to come up with a spacesuit that will allow expeditionary crews to work effectively on Mars.

"The kind of suit that we're talking about is a blue-collar suit. You've got to be able to be out and about on Mars 7 to 8 hours a day, seven days a week," said project leader Lawrence Kuznetz, a UC Berkeley professor and former NASA engineer with a long history of investigating Mars spacesuit concepts. [Evolution of the Spacesuit in Pictures (Space Tech Gallery)]

"It's not like the spacesuits of the past, those used in Apollo, for the space shuttle or to carry out spacewalks from the International Space Station," Kuznetz told Space.com. "So it's a fresh sheet of paper for a planetary suit to use on Mars. You are talking about a planet. You're not talking about space or the moon, where the environment is always the same."

About 50 Berkeley students are now taking part in this MarsSuit Project, via a design class that began in mid-January. That core group, Kuznetz said, is one slice of a larger, interactive talent pool that includes the University of Helsinki, Texas A&M University, the Massachusetts Institute of Technology, and students at the Technical University of Ljubljana in Slovenia and at other institutions, along with several NASA centers, nonprofits and private organizations, such as Paragon Space Development Corporation in Tucson, Arizona.

Teams have been established to delve into everything from hardware, soft goods and software to boots, gloves, thermal control and waste management.

"The long-range vision is to have this course semester after semester," Kuznetz said, "with each semester building upon the work of the prior semester … all intent on maturing the MarsSuit design."

The MarsSuit Project draws from earlier work done by Kuznetz: the "K suit," which separates the helmet from the torso in a hybrid dual system.

"Mars is more like Antarctica … and it has an atmosphere," Kuznetz said. "What you can get from the Mars environment is carbon dioxide, and that it's cold and it's dry. Those three things give you a real leg up."

The MarsSuit Project team is focused on a two-suits-in-one concept, Kuznetz said. The helmet contains pressurized oxygen, and the Mars atmosphere pressurizes the rest of the suit. A neck dam separates the two components, Kuznetz said. Taking that approach, he said, means the suit won't need heat exchangers, fans, pumps or liquid-cooled garments, and this will reduce the weight of a Mars explorer's portable life-support system.

Those taking part in the MarsSuit Project have come up with a number of other ideas. The team has scoped out a lightweight, integrated radiation-protection device, for example. Then there's alert, caution and suggestion software that would serve as a personal mission control while an individual worked on Mars, far from Earth. Also under consideration are suit layers that could be peeled off and put back on, as needed depending on the Martian weather.

Kuznetz said a potential human landing on Mars in 2032 would require NASA to release a request for proposals for a Mars suit 10 years prior, in 2022.

"It's now 2017, and in five years, I want to have an integrated, university-industry expert team [ready] to actually make a bid on that suit," he said.