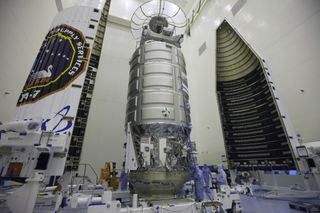 The Orbital ATK Cygnus spacecraft S.S. John Glenn is encapsulated in its protective payload fairing on March 9 ahead of its planned cargo launch to the International Space Station. The spacecraft is scheduled to launch on an Atlas V rocket from Cape Canaveral Air Force Station in Florida on March 27.
(Image: © Kim Shiflett/NASA)

Update for March 23: The launch of Orbital ATK's next cargo ship bound for the International Space Station has been delayed yet again, this time by a different hydraulic issue on the spacecraft's United Launch Alliance (ULA) Atlas V rocket. The mission, which was scheduled for a March 27 liftoff, is now postponed until the booster issues can be resolved.

"The ULA team is developing a plan to resolve the issue and a new launch date will be determined," NASA officials wrote in a status update.

"The evolution of the situation does not permit the restart of operations for the Ariane 5 launch scheduled for today, Thursday, March 23, Arianespace has decided to postpone the launch," the company representatives said in a statement.

Two rocket launches scheduled for this week, one for Orbital ATK and the other for European launch provider Arianespace, have been delayed.

An Arianespace Ariane 5 rocket was scheduled to launch two communications satellites for Brazil and South Korea today (March 21) from the Guiana Space Center in Kourou, French Guiana. But Arianespace representatives said that mission has been delayed to Thursday (March 23) due to a "social movement."

Meanwhile, the U.S. aerospace company Orbital ATK was expected to launch NASA cargo on Friday (March 24) using a Cygnus cargo ship and an Atlas V rocket. That mission, which has already been delayed due to rocket hydraulic component issue, will now launch from a pad at Cape Canaveral Air Force Station in Florida no earlier than Monday (March 27), NASA officials wrote in a status update.

According to an update from Arianespace, the Ariane 5 rocket is now scheduled to lift off Thursday at 4:31 p.m. EDT (2031 GMT). The mission will launch the Geostationary Defense and Strategic Communications satellite for Brazil's VISIONA Tecnologia Espacial S.A. (on behalf of the Brazilian operator Telebras S.A.) along with the Koreasat 7 communications satellite for KTSAT of South Korea. The "social movement" blamed for the delay by Arianespace caused by a labor strike at the spaceport, according to Spaceflight Now.

Orbital ATK initially aimed to launch Cygnus' next NASA delivery mission, called OA-7, on March 16. But that flight was delayed to March 19 —  and later to March 21, then March 24 — due to a hydraulic component issue on the Atlas V rocket's first stage.

Yesterday, NASA officials wrote in an update that the new delay to March 27 " allows the ULA team to troubleshoot a hydraulic issue discovered on ground support equipment needed for launch."

The OA-7 mission will deliver about 7,600 lbs. (3,447 kilograms) of food, equipment and other NASA supplies for astronauts living on the International Space Station.