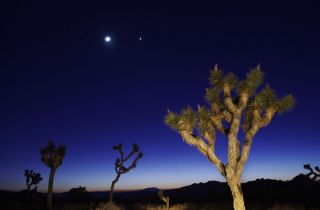 The moon and Venus shine above Joshua Tree National Park on Jan. 28, 2000. Venus will appear bright in the night sky after dusk during March 2017. Its crescent shape will be visible through binoculars or a telescope.
(Image: © David McNew/Newsmakers)

Ever since last fall, Earth's sister planet — as Venus is often called — has been the centerpiece of the sky at dusk. In February, the planet's evening show reached its climax, when Venus not only achieved its greatest brilliance but also evolved into a crescent phase, a splendid sight to behold through a telescope.

Venus' current crescent phase, which can be glimpsed even through binoculars, is one of the leading celestial attractions for astronomy neophytes. Around the time of inferior conjunction on March 25 — when Earth and Venus are on the same side of the sun — Venus is a delicate hairline crescent not at all easy to observe. To find this planet near the sun, you'll need binoculars or a telescope on a firm mount or tripod, a very clear sky, and most important of all, a careful attention to safety.

You should NEVER look directly at the sun without proper eye protection. It is extremely important not to risk catching sight of the sun through your binoculars or telescope; doing so could result in irreparable damage to your vision. Concentrated sunlight can also harm a telescope's internal parts. [The Brightest Planets in March's Night Sky]

Probably the best and safest technique to spot Venus on the 25th is to point your telescope the evening before at a star that has nearly the same declination as Venus.

I would suggest a particular star located in the constellation of Orion, the Hunter, which is currently visible high in the south-southwest sky at nightfall.

Look midway between the two stars that mark Orion's shoulders, Betelgeuse and Bellatrix. Above these stars, you'll see a small triangle of dimmer stars, supposedly marking Orion's head. The star at the top of the triangle is at least twice as bright as the other two. Older star atlases refer to it as Meissa (also known as Lambda Orionis), and it will be an ideal guide star to help you locate Venus in the daytime on March 23, 24 and 25.

So, the evening before, about 90 minutes after sunset, look to the southwest for Orion, tilted a bit to the right. Meissa will be halfway up, in the west-southwest sky. Now, follow these three simple steps:

At the precise time that Venus is scheduled to be visible, make sure the sun is out of the field of view, and have a look. If the thin arc of Venus can't be detected against the bright sky, take your eye away before shifting the tube even slightly, to avoid the risk of accidentally sweeping over the sun.

A low-power, wide-field eyepiece is preferable. The triangle of stars marking Orion's head is roughly the same angular size as the moon. So, if you can fit the moon into your field of view, you'll be able to fit Meissa and its two neighboring stars. This means that you probably will not need to move your binoculars or telescope very much if Venus is not precisely centered.

In addition, carefully prefocusing your telescope the evening before will aid you greatly in locating Venus during the day. Visibility can also be improved if the sun is hidden behind some obstruction, like the roof of a house, so that you and your telescope are in shadow with no part of the scope sunlit.

When Venus is a narrow crescent, you will sometimes see cusp extensions, meaning the crescent appears longer than a semicircle. As a rule, you'll need a very clear sky to see the faint extensions of Venus' cusps.

Try to record how far, if at all, the cusps extend beyond 90-degrees from the center of the crescent. Can you trace them around a full circle? The extensions were explained in the late 19th century as light scattered through the upper atmosphere of Venus. Yet effects from solar flares interacting with the dense Venusian atmosphere apparently play a role too, because the cusp extensions are seemingly enhanced during times of flare activity.

Be safe and good luck!