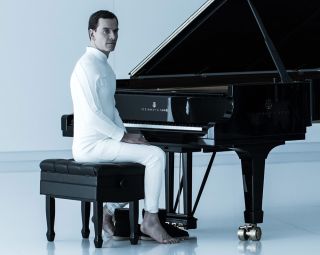 A new "commercial" shows a synthetic human under construction in the lab before he wakes up and introduces himself as "Walter."

The unsettling video, which features the tagline "Created to serve," was released March 10 as part of the promotion campaign for the film "Alien: Covenant," which carries on the "Alien" franchise and premiers in theaters May 19. The commercial features processors made by real-life semiconductor company AMD, although the synthetic is said to be created by a fictional corporation called Weyland-Yutani.

"In AMD, we have a partner at the forefront of developing and implementing artificially intelligent technologies, showcasing where the future of AI may well be heading," director Ridley Scott said in a statement.

The video shows the synthetic's torso lying on a lab table, with technicians systematically attaching the head, putting fluids into the body and putting a protective cover on the android. After some time has passed, the cover is removed, revealing the completed "Walter" — played by Michael Fassbender — as he receives last-minute checks before starting work.

"Androids display synthesized emotion, superficially register self-awareness and, most importantly of all, have the ability to reason, conceptualize and offer opinion," reads the entry on synthetics on the Alien Anthology Wiki. However, they do not have human-like consciousness, the entry added.

The new video points to meetwalter.com, a website that shows the capabilities of the synthetic — or "artificial person," as these beings prefer to call themselves. The site promises "emotional intelligence" (being able to sense others' emotions, although the synthetic does not have emotions itself), biosocial compatibility that is customized to the synthetic's companions, biometric self-regulation and advanced cognitive processing.

The Alien franchise's first film, "Alien," was released in 1979, portraying Ellen Ripley (Sigourney Weaver) fighting against an extraterrestrial being called the "Alien," or "Xenomorph." Scott has referred to "Prometheus" (2012) as a "one-off" movie in the franchise. "Alien: Covenant" will be the first of a trilogy prequel.