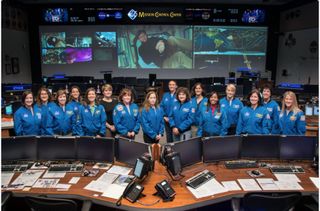 At the top of NASA's Twitter page today is a group photograph of 17 women who have served as astronauts for the agency, including four members of NASA's newest astronaut class, astronaut Peggy Whitson who is currently on the International Space Station (she appears on the screen behind the other women), and some former astronauts who have now serve other roles with the agency.

NASA also released a new virtual-reality tour starring several women who work in the STEM fields (science, technology, engineering and mathematics) within the agency. The tour is part of a collaboration between NASA and Google to create free virtual field trips for teachers and educators. [Lego to Make 'Women of NASA' Minifigs, Including Sally Ride, Katherine Johnson]

The NASA Modern Figures virtual tour is available via the Google Expeditions mobile app, which requires a smartphone and a VR viewing apparatus, such as Google Cardboard. Unlike a regular video, the VR experience lets viewers look around at the various NASA locations.

One of the stars of the tour is Tracy Drain, deputy chief engineer for NASA's Juno mission to Jupiter, who takes viewers on a tour of the Space Flight Operations Facility at NASA's Jet Propulsion Laboratory in Pasadena, California, according to a statement from the agency. The facility is home to the Deep Space Communications Network, the hub of communications with robots exploring various corners of the solar system. It is also where NASA staff assisted the Mars Curiosity Rover down to the surface of the Red Planet.

The rest of the tour "gives students a three-dimensional experience in a 100,000-square-foot aircraft hangar, simulated Martian landscape, space flight operations facility, and other fascinating locations where these women work as materials scientists, launch directors, software engineers, and in other STEM fields," according to the statement.

"Modern Figures" is a reference to a NASA project called "From Hidden Figures to Modern Figures," which is a dedicated section on NASA's website featuring biographies of the three women at the center of the Oscar-nominated movie "Hidden Figures." The movie was based on Margot Lee Shetterly's book, "Hidden Figures: The American Dream and the Untold Story of the Black Women Mathematicians Who Helped Win the Space Race" (William Morrow, 2016). The book and subsequent film told the stories of three African-American women who worked at NASA in the 1960s and contributed to NASA's early human spaceflight program. The Modern Figures web page features videos and information that highlight the diversity of people who work or have worked at NASA.

"The Google Expeditions partnership supports NASA's mission to inspire and attract kids into STEM studies and careers by providing opportunities for students to virtually step out of the classroom and experience NASA careers, missions and locations in space without leaving their desks," the statement said.

You can learn more about the women of NASA via the agency's Women@NASA website, which includes video interviews with over 60 women who work at the agency in various capacities.