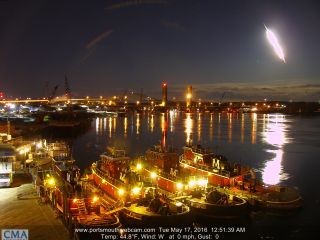 Very bright meteors — such as this one, which lit up the night sky over Portsmouth, New Hampshire, on May 17, 2016 — sometimes generate mysterious hissing or popping noises that are audible to human ears.
(Image: © Mike McCormack | portsmouthwebcam.com)

The bizarre hissing and rustling noises that some fireballs make may finally have an explanation.

These faint sounds are probably created when bright pulses of light from the meteors heat up certain objects on the ground below, a new study reports. These objects — for example, leaves or hair — radiate thermal energy into the nearby air, producing pressure waves that generate a variety of sounds.

The mysterious sounds are associated with very bright fireballs, meteors that blaze up at least as intensely as the full moon shines in the sky. Generally, an incoming object must weigh 1.1 lbs. (0.5 kilograms) or more to make noise audible to humans, Sweatt said.

The faint, whispery sounds have been described in many different ways by people who have heard them; popping, sizzling, rustling and hissing are commonly employed adjectives. And hearing them is a rare treat indeed.

"I think a person's lucky if they get one per lifetime," Sweatt told Space.com.

The origin of meteor noises has perplexed scientists and laypeople alike for decades. They arrive at the ear as the eye is taking a fireball in, which means the sounds cannot be generated at the meteor's surface. (Meteors burn up high in Earth's atmosphere, far from the ground, so sound waves traveling all the way to a listener's ear would get there long after the meteor's light would.)

Some scientists have proposed that the sounds are radio-frequency emissions. But this seems unlikely to be the main driver, Sweatt said, because people commonly hear meteor noises even without designated receivers. (Attempts to validate this hypothesis experimentally have also come up short, he added.)

So the study team — led by Richard Spalding, who was also with Sandia but has since passed away— came up with a different possible explanation: "photoacoustic coupling."

In photoacoustic coupling, light heats up the surface of an object, causing it to radiate heat. This heat produces pressure oscillations in the air, which can manifest as sounds loud enough to be heard by human ears.

This effect is real: Alexander Graham Bell, who patented the telephone, observed photoacoustic coupling way back in 1880. The researchers also provided more accessible proof in the new study. They converted a violin recording of the song "Greensleeves" (played by co-author Ben Conley, also of Sandia) into a light signal, beamed that light at black-painted Plexiglas, and captured the resulting photoacoustic sound with a microphone.

That sound was a bit scratchy, but it was very recognizably "Greensleeves."

"We were quite pleased with that," Sweatt said.

Calculations performed by the team suggested that photoacoustic coupling might be causing fireball sounds, so the researchers put the idea to the test. They exposed a variety of materials — including wood, black felt, green leaves and a wig — to light similar to that produced by bright fireballs as they streak through Earth's atmosphere.

These experiments generated faint, whispery sounds. Dark materials were good noise generators, as was the wig, so the study could serve as a guide for prospective meteor-listeners around the world: Before heading out to your dark, quiet observing spot, dress in all black and perm and dye your hair (or, if you're less committed, wear a dark wig).

The new study was published in the journal Scientific Reports on Feb. 1, shortly before Spalding died.

"Fortunately, he saw the paper come out first," Sweatt said. "And his wife said he smiled. In the face of adversity, it was a small victory."