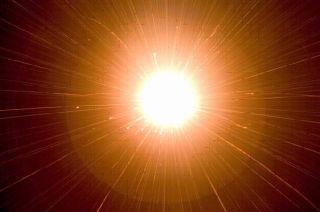 NASA jobs have long been coveted for their cool factor. Bill Cooke's current project is no exception. Cooke is slamming quarter-inch-diameter Pyrex glass marbles into soil at 16,000 mph (7 kilometers per second) just to watch them explode.

"We are simulating meteoroid impacts with the lunar surface," Cooke said in a statement today.

Cooke and colleagues spotted a very bright and real lunar impact last December. They documented two impacts during the November Leonid meteor shower. And they recently determined that the Moon is struck more often than they realized.

So the serious game of marbles is aimed at improving safety on the Moon for future astronauts.

On the Moon, a typical flash involves "a meteoroid the size of a softball hitting the Moon at 27 kilometers per second and exploding with as much energy as 70 kg of TNT."

"Mind you," Cooke said, "these are estimates based on a flash of light seen 400,000 kilometers away. There's a lot of uncertainty in our calculations of speed, mass and energy. We'd like to firm up these numbers."

Cooke's team is using the Ames Vertical Gun Range at NASA's Ames Research Center in Mountain View, CA, to shoot marbles into simulated lunar soil. The firings allow him to calibrate what he sees on the Moon.

"We measure the flash so we can figure out how much of the kinetic energy goes into light," he explained. "Once we know this luminous efficiency, as we call it, we can apply it to real meteoroids when they strike the Moon."

High-speed cameras and a photometer (light meter) record the results, including this image.

The researchers fired a dozen marbles into dust made from pumice, a volcanic rock, at up to 7 kilometers per second last October. Follow-up experiments will use simulated lunar soil developed from terrestrial ingredients.

The experiments are designed to shed light on how much material is ejected from an impact site and at what angles.

"The ejecta kicked out from an impact can travel hundreds of miles," Cooke said. "We need to know more about that if we are going to live on the lunar surface for months at a time."

On Earth, most of the incoming debris burns up in the atmosphere. But the Moon has virtually no atmosphere, so particles all make it to the surface and are not slowed down.

As NASA explains it, you might dodge a bullet but still get caught by its shrapnel. Among the questions they want to answer: Are you more likely to get cut off at the ankles by debris spattered along the horizon, or hit from above by material on high, ballistic trajectories?