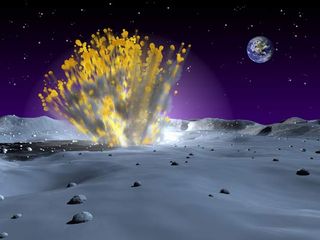 Artist's rendering of a small but powerful meteor strike on the surface of the moon. This view demonstrates a key concern for future lunar explorers in mitigating potential risks from impact “ejecta” - the spray of debris that follows an impact, unimpeded by gravity or atmosphere. NASA astronomers are studying lunar impacts to help safeguard future missions to Earth's nearest celestial neighbor.
(Image: © NASA/Marshall Space Flight Center)

Add one more crater to the already beat-up Moon. Astronomers have recorded a tiny blip northwest of Mare Imbrium, a flash caused by a meteoroid hit within the "Sea of Showers."

While such impacts are not uncommon, it was only in 1999 that a meteoroid hit was first recorded as it took place. This new observation of a run-in between Moon and meteoroid was recorded on Nov. 7, spotted by Robert Suggs, Space Environment team lead in the Natural Environments Branch of the Marshall Center's Engineering Directorate in Huntsville, Alabama.

The flash "was about as bright as a 7th magnitude star," Suggs said. That's dimmer than the faintest star a person can see with the unaided eye.

Suggs, who heads a study on lunar impacts, used commercial software tools to study video taken frame by frame, spotting the very bright flash. The burst of light diminished gradually over the course of five video frames, each 1/30th of a second in duration.

Noting the flash, Suggs called in Bill Cooke, an astronomer in Marshall's Meteoroid Environment Office. Both scientists agreed that the bright light was an impact flash.

Other possible causes were ruled out. Two telling characteristics won out: the gradual diminishment of the flash rather than an on-off "winking" effect, and its motionlessness.

One cause that was discounted was the flicker of light from a moving satellite. That would have appeared to shift perceptibly, even in five brief frames of video, Cooke noted in a Dec. 22 press release issued by the NASA Marshall Space Flight Center.

Suggs and Cooke next consulted star charts and lunar imaging software. Doing so, they determined the meteoroid was likely a Taurid, part of an annual meteor shower active at the time of the strike, and thought to be ancient remnants from comet Encke.

Kim Newton, a spokeswoman for the NASA center, told SPACE.com that the video imagery strike was acquired from a parking lot at Marshall. The two researchers are very excited about the find, she said.

The research work is of particular interest as NASA plans to return to the Moon. The agency has a need to understand lunar impacts in order to protect future expeditionary explorers and hardware stationed on the Moon.

Earth's atmosphere vaporizes most small meteoroids that come our way, leaving nothing behind but a brief streak of light. But there is nothing to slow incoming meteoroids before they hit the Moon.