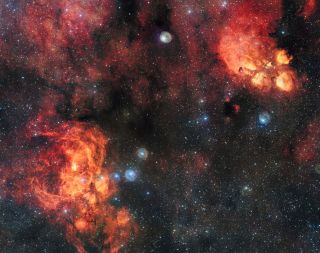 This image from the VLT Survey Telescope shows the Cat's Paw Nebula (right) and the Lobster Nebula (left), two clouds of cosmic dust and gas with active star formation. Hot, young stars cause the surrounding hydrogen gas to glow red. With around 2 billion pixels, this is one of the largest images ever released by ESO.
(Image: © ESO)

In a new deep-space photo of two starry nebulas, a cat's paw reaches out to high-five a glowing, red lobster.

These two animal-shaped space blobs consist of interstellar gas and dust that is fueling the formation of new stars. Their evocative shapes have earned these two nebulas the nicknames the "Cat's Paw Nebula" and the "Lobster Nebula." You can see a spectacular video of the nebulas here.

Astronomers imaged these two neighboring nebulas using the Very Large Telescope (VLT) Survey Telescope at the European Southern Observatory (ESO) in Chile. The stunning, 2-billion-pixel view is one of the largest images ESO has ever released. [Gallery: Strange Nebula Shapes]

The VLT Survey Telescope (VST) is one of five telescopes in the VLT array at the observatory, which is located on Cerro Paranal mountain in the Atacama Desert of northern Chile. Mounted on the telescope is a 256-megapixel camera called OmegaCAM, which can capture images 16 times larger than those take by the Hubble Space Telescope's Advanced Camera for Surveys.

ESO has made the ginormous, high-resolution image available online. You can zoom in and pan around to check out every nook and cranny of the cosmic cat-lobster combo.

Before ESO pointed its OmegaCAM at these two nebulas, the observatory imaged them both individually using two older ESO telescopes. In 2010, the Cat's Paw Nebula— officially named NGC 6334 — was imaged from ESO's La Silla Observatory about 670 miles (1080 km) south of VST. In 2012, ESO released a VLT image of the Lobster Nebula, which has also been called the "War and Peace Nebula" and is officially named NGC 6357.

The brightest regions of these nebulas — the cat's toe pads and the lobster's claws — glow bright red because they're filled with hydrogen gas and baby stars. Bright ultraviolet light from the newborn stars causes the hydrogen gas to ionize. Because of this, these nebulas are categorized as emission nebulas.

VST captures images in the visible-light spectrum, so these glowing nebulas really are as bright as they appear in the pictures. Though the image is crisp and clear, there's a lot going on inside those dusty clouds that viewers can't see. To detect what's behind the cloudy curtains, astronomers use infrared telescopes like ESO's La Silla Observatory.