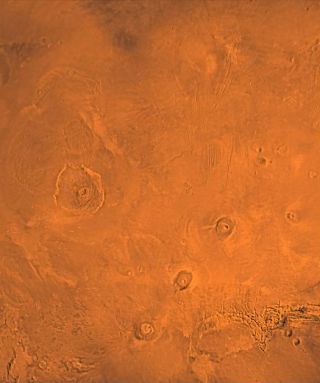 An image from NASA's Viking mission showing the Tharsis volcanic region of Mars. At left is Olympus Mons. The chain of volcanoes at lower right consists of, from bottom to top, Arsia, Pavonis and Ascraeus Mons.
(Image: © NASA/JPL/USGS)

Volcanoes erupted on Mars for nearly half of the planet's history, a new study suggests.

A team of scientists determined that a Mars meteorite known as Northwest Africa (NWA) 7635 cooled and solidified 2.4 billion years ago — about 2 billion years earlier than other, similar Red Planet rocks from the same "volcanic center."

The finding indicates that Mars hosts some of the longest-lived volcanoes in the solar system, study team members said. [7 Biggest Mars Mysteries]

The researchers, led by University of Houston geology professor Tom Lapen, analyzed 0.07 ounces (2 grams) of material from the interior of NWA 7635, which was discovered in Algeria in 2012. The scientists identified NWA 7635 as a type of volcanic rock called a shergottite, and they dated its solidification to 2.4 billion years ago, give or take 140 million years.

Lapen and his colleagues further determined that NWA 7635 is very similar compositionally to a set of other Mars shergottites, which range in age from 327 million years to 574 million years. In addition, all of these shergottites, including NWA 7635, were blasted off Mars by an impact about 1.1 million years ago.

"We see that they came from a similar volcanic source," Lapen said. "Given that they also have the same ejection time, we can conclude that these come from the same location on Mars."

So this single location was likely volcanically active for at least 2 billion years, a significant chunk of the Red Planet's 4.57-billion-year history, study team members said.

This finding is consistent with interpretations based on other methods such as crater counting, Lapen and his colleagues wrote in the new study, which was published today (Feb. 1) in the journal Science Advances. (Crater counting allows scientists to estimate the age of a planet's or moon's surface, assuming that cosmic impacts occur at a relatively constant rate.)

"A crater-counting chronology, based on recently acquired high-resolution images, indicates that calderas on major volcanoes from the Elysium and Tharsis regions on Mars have undergone repeated activation and resurfacing. Both the Elysium and Tharsis volcanoes evidently formed before 3.6 Ga [billion years ago], followed by episodes of subsequent volcanic eruptions (lava flows)," the researchers wrote.

"Crater-counting ages of some of those volcanoes indicate activity spanning more than 3 billion years (that is, Alba Mons, Biblis Tholus, Jovis Tholus, Uranius Mons and Hecates Tholus), suggesting a long history of active volcanism from spatially restricted sites on Mars," the researchers added.

Mars volcanoes are extreme in characteristics other than age as well. For example, the Red Planet's Olympus Mons is the tallest mountain in the solar system; at 16 miles (25 kilometers) high, Olympus Mons is nearly three times taller than Mount Everest here on Earth.

Olympus Mons is also 374 miles (624 km) wide, meaning it covers about the same amount of area as the state of Arizona.