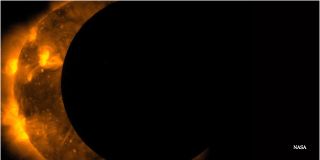 The 2017 solar eclipse that sweeps across the United States this August — which is being called the Great American Eclipse — will be the science highlight of the year. Whether you are an amateur or professional astronomer or an occasional stargazer, NASA is on the hunt for people eager to contribute to science during the eclipse.

Tyler Nordgren is an astronomy professor at the University of Redlands in California, who will give a talk on citizen science during the solar eclipse at the American Association for the Advancement of Science (AAAS) conference in Boston next month. To do some experimenting, you need little more than a pair of solar eclipse glasses and a smart phone. Here are some of the experiments in which you can take part:

Tracking the moon's shadow. This experiment is great for elementary school kids. If you're lucky enough to see the eclipse in a mountainous area, you may see the moon making some nearby high landmarks dark before the solar eclipse reaches you. If you know how far away those landmarks are and if you have a phone or a smartwatch tracking the time, you can estimate how fast the moon's shadow moves across the landscape.

Calculating general relativity. Suitable for high school, university and adults, this experiment allows you to replicate the experience of astronomers during the 1919 eclipse when Einstein's theory of general relativity was showcased. (The theory, in part, has to do with how gravity bends light). "The idea is to have people take images of the sun and the stars around it during the total solar eclipse," Nordgren said, "and because of the sun's gravity, it would warp the fabric of space-time around the sun. So, stars only visible during the eclipse will have their positions slightly altered as their light passes by the sun." In 1919 this required state of the art equipment. In 2017, you just need a telescope and a digital camera.

Measuring light and temperature changes. Most smart phones have light meter apps where you can measure the ambient light, and an old-school mercury thermometer would let you keep track of the temperature, Nordgren said. "You can use your iPhone to identify what your GPS location is," he said, which means you can track these items precisely by location. Even time will be more precise, he added. "Back in the day we all had our wristwatches ... we all now have satellite-enabled clocks at our disposal." More details here and here.

Taking video. Even with a smart phone, you can capture stunning video of the total phase of the eclipse. There are at least two projects in which citizen scientists can take part. The Eclipse Megamovie will gather information from at least 1,000 observations and stitch them all together into one massive video. Then there is the Citizen Continental-America Telescopic Eclipse Experiment, which has volunteers operating telescopes in the hopes of gathering scientific data that can be used by the community; CATE's data will also be stitched into a 90-minute video. More information about the projects are on their respective websites.

Nordgren emphasizes there is a "long history" of scientists involving the general public in learning about eclipses. Perhaps the first recorded example is British astronomer Edmund Halley, who wanted to revise his orbit of the moon when a total eclipse happened over London in 1715. "He needed to know exactly when the eclipse would be visible," Nordgren said. "So he put out posters ahead of time asking people to go out, stand at their house, look at totality and use the clock in their house to see how long totality lasted."

To learn more about the 2017 solar eclipse, you can check out Nordgren's book Sun Moon Earth, which was published last year and concerns the history of solar eclipses. Nordgren has also created some nifty eclipse-themed posters, available at his website.

WATCH VIDEO: How Scientists Study The Sun Without Looking At It