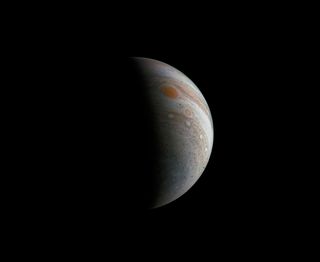 That's no moon — it's a crescent Jupiter!

The giant gas planet is shown in stunning detail in this photo. It was created by a citizen scientist using raw image data from NASA's Juno spacecraft, which has been orbiting Jupiter since July 4, 2016.

Many prominent features of Jupiter are visible in the photo, including the famous Great Red Spot and its smaller companion, Oval BA. A series of round, white storms spans across this crescent view of Jupiter. In total, Jupiter currently has eight of these storms, which are known as the "string of pearls," NASA officials said. [See More Amazing Jupiter Photos by Citizen Scientists]

NASA has been releasing all of the image data captured by Juno's JunoCam instrument to the public, so that citizen scientists can process the photos into stunning new views.

This newly processed photo, which NASA released Friday (Jan. 13), was made by Roman Tkachenko using a JunoCam photo taken on Dec. 11, 2016, during the spacecraft's most recent close flyby of Jupiter. At the time, Juno was about 285,100 miles (458,800 kilometers) from the giant planet's cloudtops, NASA officials wrote in an image description.

Juno's current orbital path around Jupiter is highly elliptical; the probe performs such close flybys just once every 54 days.