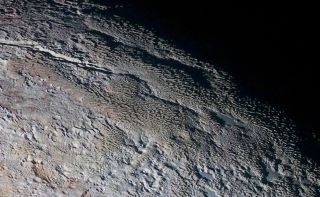 The bladed terrain of Pluto’s Tartarus Dorsa region, imaged by NASA’s New Horizons spacecraft during its flyby of the dwarf planet in July 2015.
(Image: © NASA/JHUAPL/SwRI)

The "scales" of this alien landscape, which were first spotted by NASA's New Horizons spacecraft during its epic Pluto flyby in July 2015, are ice ridges 1,650 feet (500 meters) or so tall. But they're very similar to erosion-formed features known as "penitentes," which rise just a few meters above the ground in cold, mountainous regions of Earth, the scientists said in the study.

"This gargantuan size is predicted by the same theory that explains the formation of these features on Earth," study lead author John Moores, of York University in Toronto, said in a statement. "In fact, we were able to match the size and separation, the direction of the ridges, as well as their age — three pieces of evidence that support our identification of these ridges as penitentes." [Amazing Pluto Photos by New Horizons]

The penitentes of Pluto and Earth differ in both composition and size: Earth's are made of snow or water ice, whereas Pluto's ridges are mostly methane and nitrogen ices, the researchers said.

Moores and his colleagues used computer simulations to model the growth of penitente-like features in Pluto's unique environment. Their results suggest that, although these ice ridges are currently known to exist only on Earth and Pluto, they may also be on other solar system bodies with the right conditions — for example, low temperatures and the presence of an atmosphere.

The new study, which was published this week in the journal Nature, also indicates that Pluto's penitentes probably formed within the past few tens of millions of years, the researchers said. (These features were so named because arrays of them look like groups of people on their knees, doing penance for their sins.)