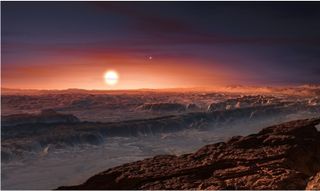 This artist's illustration shows what it might look like on the surface of Proxima b, a planet recently discovered orbiting Proxima Centauri, the nearest star to the sun.
(Image: © ESO/M. Kornmesser)

Two of the 10 most important scientists of 2016 are space researchers, according to the prestigious journal Nature.

Nature has named physicist Gabriela Gonzalez, part of the Laser Interferometer Gravitational-wave Observatory (LIGO) Scientific Collaboration, and astronomer Guillem Anglada-Escudé, leader of the team that discovered the exoplanet Proxima b, to the journal's annual list of "10 people who mattered in science."

In February, LIGO spokeswoman Gonzalez and the rest of the team announced the first-ever direct detection of gravitational waves, ripples in the fabric of space-time first predicted by Albert Einstein's theory of general relativity a century ago. The researchers announced a second detection in June.

In August, Anglada-Escudé and his colleagues told the world they had spotted a roughly Earth-size exoplanet orbiting Proxima Centauri, the closest star to the sun, at just 4.2 light-years away. This alien world, known as Proxima b, may even be capable of supporting life as we know it, the astronomers said.

"The scientists on the 2016 Nature's 10 list are a diverse group, but they have all played important parts in major scientific events this year, with the potential to effect change on a global scale," Richard Monastersky, a News Features editor at Nature, said in a statement.

This is not the first high-profile accolade for the LIGO group. The team also won Physics World's "Breakthrough of the Year" award, the 2016 Gruber Cosmology Prize and the Breakthrough Foundation's "Special Breakthrough Prize in Fundamental Physics" (which comes with a $3 million purse), among other honors.