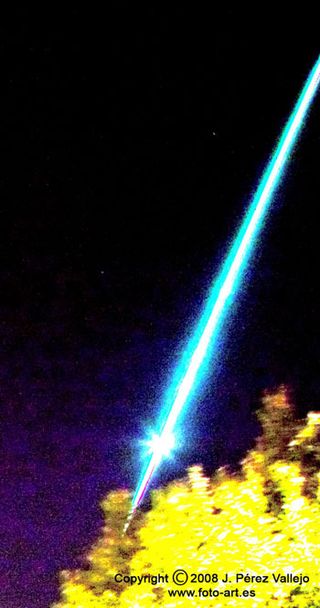 Bright lightsthat suddenly streak across the night sky with an accompanying boom tend to elicita flurry of phone calls to local police departments.

These rareevents aren't typically wayward missiles, or satellitedebris (as was thought when one such streak recently lit up the skies over Texas), or alien invasions. But they do come from outer space.

Scientistsaptly call the objects fireballsbecause they are the brightest meteors, or "shooting stars," thatfall to Earth.

A fireballas bright as the full moon raced across the Spanish skies on July 11, 2008, andwas tracked by the Spanish Fireball Network (SPMN). Researchers used thetracking data to trace the path of the comet backwards through the sky andspace; they think the boulder may be a chunk of a comet that broke up nearly 90years ago. Their conclusions are detailed in the Feb. 11 online issue of thejournal Monthly Notices of the Royal Astronomical Society.

It'spossible that chunks of the fireball made it to the ground and are waiting tobe picked up, the researchers said, which would give scientists a rare glimpseinto the heartof a comet.

Earth andthe other planets of the solar system are under constant bombardment fromparticles that range in size from a sand grain to a boulder and arecollectively knownas meteoroids. Many meteoroids are the detritus left over from collisionsof asteroids and comets and impacts to other planets.

If ameteoroid enters Earth's atmosphere, it starts to burn up, forming a brightstreak in the sky, called a meteor. Meteors can come from asteroid or cometfragments. If that meteor is brighter than any of the planets in the sky, it isdeemed a fireball (also called a bolide).

A blazingbolide can also create a sonic boom that can be heard up to 30 miles away ?these explosive noises were heard over Kentucky on Friday, Feb. 13, and over Texas on Sunday, Feb. 15, causing a number of startled citizens to call local lawenforcement.

Initialspeculation that these streaks of light and accompanying boom were caused bydebris from the Feb. 10 collision of two satellites was later refuted byastronomers, who said it was likely a meteor. Preston Starr, theobservatory manager at the University of North Texas, told the Associated Pressthat the object would have been about the size of a truck and that somewherebetween eight and 10 such objects burn up in the atmosphere every year.

The bolidethat shot across the Spanish skies in July was also seen in Portugal and southern France.

At maximumintensity, it was 150 times brighter than the full moon. It was first picked upby the SPMN above Bejar in the western part of Spain at a height of about 61miles (98 kilometers) and disappeared from view at about 13 miles (21kilometers) above the surface of the Earth.

Aprofessional photographer also snapped a picture of the streak from the northof Madrid.

From theseimages, astronomers Josep Trigo-Rodr?guez of the Institute of Space Studies, CSIC-IEEC in Spain, Jos? Madiedo of the University of Huelva-CIECEM in Spain and Iwan Williams of the University of London were able to deduce the trajectory andproperties of the incoming fireball.

Their workwas funded by the Spanish Ministry of Science and Innovation, the NationalInstitute of Aerospatial Technique, and the Junta de Andaluc?a.

The teamthinks the bolide was a dense object, about 3 feet (about 1 meter) across witha mass of about 4,000 pounds (1.8 tonnes). This would be like squeezing anadult elephant down to the size of an armchair.

The rockwould have been big enough that chunks of it may have survived the fierypassage through the atmosphere and hit the ground as meteorites. Finding thesepieces would be a boon to science if they are, as the team suspects, remnantsof a comet breakup.

The bolidetraveled an unusual orbit around the sun, as determined by the astronomers,following a path that took it from beyond the orbit of Jupiter to the vicinityof Earth. This orbit is similar to that of a cloud of dust particles known asthe Omicron Draconids, which on rare occasions produce a minor meteor shower onEarth.

Thiscollection of meteoroids is thought to originate from the breakup of CometC/1919 Q2 Metcalf in 1920.

It has beenproposed that comets consist of large boulders glued together by a mixture ofsmaller particles and ice. If the nucleus of the comet disintegrates, the bouldersare set loose in space. Finding chunks of the Bejar bolide could help confirmthis theory.

"Handlingpieces of comet would fulfill the long-held ambitions of scientists ? it wouldeffectively give us a look inside some of the most enigmatic objects in thesolar system," Trigo-Rodr?guez said.