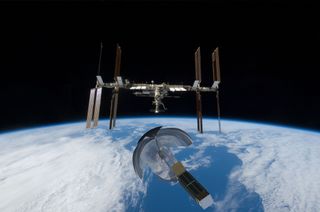 The Technical Education nanosatellite (TechEdSat-5) will be deployed from the International Space Station in early 2017, and engineers will use Exo-Brake to guide the nanosatellite through the de-orbit phase of re-entry.
(Image: © NASA)

A novel technology that could allow for accurate, guided landing of payloads returning to Earth from the International Space Station will soon undergo testing in orbit.

The technology, called "Exo-Brake," is a "tension-based, flexible braking device resembling a cross-parachute that deploys from the rear of a satellite to increase the drag," NASA officials said in a statement.

Developed and tested by engineers at NASA's Ames Research Center in California, the Exo-Brake is a de-orbit device that would be used in place of more complicated systems, the statement said. Those other systems use thrusters to slow down and guide a spacecraft during re-entry through Earth's atmosphere, according to the statement. [In Pictures: NASA's Flying Saucer for Spacecraft Landings]

An Exo-Brake system was packed inside the Technical Education nanosatellite (TechEdSat-5) and delivered to the space station aboard the Japanese Aerospace Exploration Agency's robotic H-II Transfer Vehicle 6 on Tuesday (Dec. 13). The de-orbit device will be put to the test when the nanosatellite is deployed from the orbiting lab in early 2017.

"The Exo-Brake's current design uses a hybrid system of mechanical struts and flexible cord with a control system that 'warps' the Exo-Brake — much like how the Wright brothers used warping to control the flight behavior of their first wing design," Marcus Murbach, principal investigator and inventor of the Exo-Brake device, said in the statement.

Additionally, engineers will use real-time simulations of the spacecraft's orbital trajectory to guide the craft to a desired atmospheric entry point.

Earlier versions of the Exo-Brake technology have been tested on balloons and suborbital rockets, according to the statement.

"In addition to the goal of returning samples from the space station, the project seeks to develop 'building blocks' for larger-scale systems that might enable future small or nanosatellite missions to reach the surface of Mars and other planetary bodies in the solar system," NASA officials said.