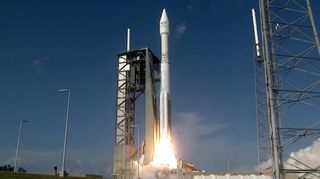 The EchoStar XIX satellite (or EchoStar 19) launched into space atop a United Launch Alliance Atlas V rocket, which soared into space at 2:13 p.m. EST (1913 GMT) from a pad at Cape Canaveral Air Force Station in Florida. Built by Space Systems Loral, EchoStar 19 will provide high-speed internet service to customers of HughesNet across North America. You can see more photos from the launch here.

"Boy, it's good to see this launch go off really well," said David Pidgeon, vice president of EchoStar opersations at SSL. "This satellite will provide high-bandwidth capability to millions of HughesNet customers."

"From the home, you will have an antenna on the roof, jus tlike you would with Dish network satellite TV, but in this case it would be connected to a router, and then to your laptop or computer," Pidgeon said.

EchoStar 19, also called Jupiter 2 by Hughes, is now the "highest capacity broadband satelltie in orbit." It is equipped with multiple Ka-band spot beams to support customers across North America, and will be stationed in a geosynchronous orbit over 97.1 West longitude to serve Hughes customers.

The launch occured after a short delay due to an avionics issue that cropped up one minute before a launch try at 1:37 p.m. EST (1837 GMT). It marked the 12th and final launch of 2016 for the United Launch Alliance, and was the 115th launch in the company's decade-long history.