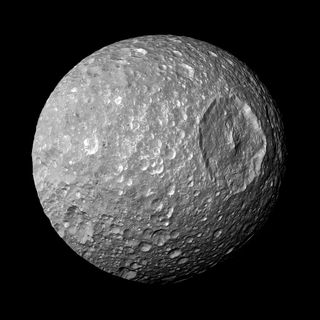 Saturn's Death Star moon Mimas only looks like a fully operational battle station. But this rocky Saturnian satellite is merely a battered moon and one of the most intriguing objects in the solar system.
(Image: © NASA/JPL-Caltech/Space Science Institute)

But there's no need to worry; there is no Death Star anywhere in this solar system. Mimas is just a harmless, and apparently lifeless, space rock. However, the mere sight of this Death Star look-alike would send shivers down the spines of the trillions of fictional characters in "Star Wars."

So why do Mimas and the Death Star look like distant relatives? Did Mimas' eerie appearance inspire the creators of "Star Wars," or is this Saturnian moon up to something seriously spooky? [See more photos of Mimas, Saturn's "Death Star" moon]

"The appearance of Mimas was not seen in detail until the Voyager spacecraft flew through the Saturn system in 1980, so the design of the Death Star was not influenced by Mimas," a spokesperson at NASA's Jet Propulsion Laboratory told Space.com. The answer is neither. Believe it or not, the striking resemblance between these two objects is a complete coincidence.

"Star Wars" creator George Lucas started dreaming up his concept for the Death Star in the 1970s, before the release of "Star Wars: Episode IV - A New Hope," the first movie of the saga, in 1977. In the film, the Death Star is dubbed the "ultimate weapon" for its outrageously powerful laser that can wipe out entire planets in just one shot. Its mobility and moon-like disguise are ideal for sneaking through space undetected.

Though George Lucas couldn't possibly have known what Mimas looked like when he created the concept of the Death Star, he certainly intended for the spacecraft to look like some type of moon. As Obi-Wan Kenobi famously said while approaching the Death Star in Episode IV, "That's no moon. … It's a space station!"

The two objects' similar shapes can be largely attributed to a giant basin on Mimas called the Herschel crater. This crater formed when an impactor collided with Mimas near the little moon's equator about 4.1 billion years ago. It measures 86 miles (139 kilometers) across, which is nearly one-third the diameter of Mimas. The impact was so huge that some scientists are surprised it didn't destroy the moon entirely.

A large, round indentation is also present on the Death Star. However, this one wasn't created by a collision. This concave feature of the otherwise spherical Death Star is a part of the station's "superlaser" emitter, or the epic space weapon capable of destroying entire worlds.

DS-1, the original Death Star design, is a central point in the plot of "Rogue One: A Star Wars Story" (which hits theaters on Friday, Dec. 16). The spacecraft measures 75 miles (120 km) in diameter. Mimas is actually about three times larger than the Death Star. Another rendition of the Death Star, DS-2, featured in "Return of the Jedi," is a bit larger, at 100 miles (160 km) across, which is larger than the first version but still smaller than Mimas.

A close look at Herschel crater reveals some qualities that aren't matched by the Death Star, though. Most obvious is its shape, which is more of an oval than a circle. In the center of the crater is a narrow peak nearly 4 miles (6 km) high. This peak arose when the collision that created Hershel crater caused material from the moon's crust to spew upward at the impact site.

Aside from the discrepancy in size and the crater's peak, almost everything else about Mimas looks eerily like the Death Star. Tiny craters even cover the moon's gray-toned surface, giving it that textured look found on the Death Star's outer shell. Mimas might not have any high-tech weapons of mass destruction, or even any sign of life, but thanks to whatever asteroid created the Herschel crater, it's the closest thing to a real-life Death Star that Earthlings have ever seen.