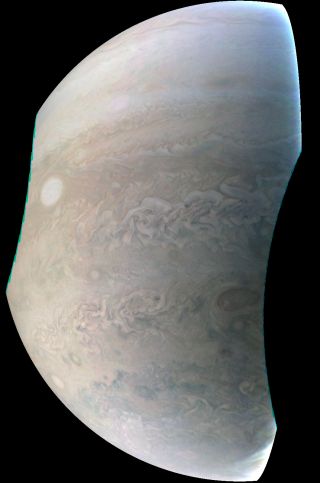 One of Jupiter's stormy "pearls" appears as a white oval on the left side of this new image by NASA's Juno spacecraft taken on Dec. 11, 2016. This is the seventh of eight massive storms that make up Jupiter's "string of pearls" storms, NASA says.
(Image: © NASA/JPL-Caltech/SwRI/MSSS)

Saturn's rings may be the jewels of the solar system, but Jupiter wears "pearls," and a NASA spacecraft has the picture to prove it.

NASA's Juno spacecraft, which made its third close flyby of Jupiter on Sunday (Dec. 11), snapped this photo of the seventh of eight features that make up a so-called "string of pearls" on the gas giant. The jewels are actually colossal storms. The "pearl" appears as a giant white oval at the left of the image taken by Juno.

The "pearls" of Jupiter are " massive, counterclockwise-rotating storms that appear as white ovals in the gas giant's southern hemisphere," NASA officials wrote in an image description. [See more of Juno's awesome Jupiter photos]

"Since 1986, these white ovals have varied in number from six to nine," NASA officials wrote in the same description. "There are currently eight white ovals visible."

Juno took this photo on Sunday at 9:27 a.m. PST (12:27 p.m. EST/1727 GMT) while buzzing past Jupiter at a range of about 15,300 miles (24,600 kilometers). The probe snapped the image using JunoCam, a visible-light color camera designed to photograph Jupiter's poles and cloud tops.

"As Juno's eyes, it will provide a wide view, helping to provide context for the spacecraft's other instruments," NASA officials wrote. "JunoCam was included on the spacecraft specifically for purposes of public engagement; although its images will be helpful to the science team, it is not considered one of the mission's science instruments."

You can check out more JunoCam photos of Jupiter processed by the public here.

NASA launched Juno toward Jupiter on Aug. 5, 2011. The mission is designed to study Jupiter's atmosphere in unprecedented detail, as well as probe planet's interior to learn more about Jupiter's origin, structure, atmosphere and magnetic field.

Editor's note: This story was updated to correct the distance Juno was from Jupiter at the time it took this image. Juno was 15,300 miles from Jupiter, not 40,000 miles.