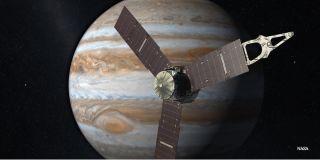 NASA's Juno mission has successfully completed its third close approach of Jupiter, NASA confirmed on Monday. Still in a 53-day orbit, the spacecraft is not due to make another close pass until Feb. 2, 2017. The moment of closest approach to Jupiter's cloud tops occurred at precisely 9:04 a.m. PST (12:04 p.m. ET) on Sunday (Dec. 11) when the spacecraft was traveling at the breakneck speed of 129,000 miles per hour.

The point of closest approach in Juno's orbit — known as "perijove" — brought the solar-powered spacecraft around 2,580 miles (4,150 kilometers) from the gas giant's atmosphere, allowing the mission to gather incredibly precise measurements of the planet's magnetic field, gravity and chemical composition.

Seven of its eight instruments were operational during perijove and NASA expects the close encounter data to be beamed back to Earth over the next few days for analysis.

According to the Juno's principal investigator Scott Bolton, of the Southwest Research Institute in San Antonio, this was the first time the mission was used to fully investigate Jupiter's internal structure by measuring the planet's gravitational field. "We are looking forward to what Jupiter's gravity may reveal about the gas giant's past and its future," he said before Sunday's encounter.

The only instrument not powered-up during perijove was the Jovian Infrared Auroral Mapper (JIRAM), which was offline while the Juno team completed a software update that processes science data. JIRAM is expected to be fully operational for its fourth perijove in February.

According to a NASA statement, mission scientists are still weighing up options as to how the spacecraft's 53-day orbit will affect operations. In October there were plans for Juno to carry out an engine burn that would have slowed the spacecraft, placing it into a shorter 14-day orbit. But during routine checks before the maneuver, a glitch was uncovered in two of the engine fuel valves. The decision was taken not to risk firing the spacecraft's main engines and instead commit to a longer 53-day loop around the Jovian system.

Juno is expected to remain in orbit for 20 months, adding a wealth of information to our knowledge not only about how Jupiter came to be, but also add more detail to how other planets form in our solar system and around other stars.

Though its sensitive electronics are protected in a special enclosure, Juno isn't expected to live much beyond its planned mission lifespan. The volume surrounding the gas giant is one of the most radioactive regions of the solar system, filled with ionizing particles that will eventually erode the spacecraft's systems. Before irreparable damage occurs, to protect Jupiter's moons from biological contamination from a crashing spacecraft, Juno will be commanded to plunge into the Jovian atmosphere at the end of its mission, taking data as it burns up, ultimately becoming one with the planet's atmospheric gases.