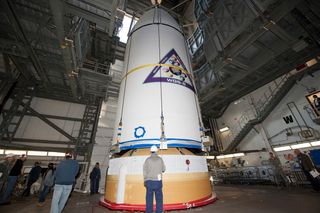 A U.S. military communications satellite will take flight today (Dec. 7), and you can catch all the spaceflight action live.

You can also view the launch directly via ULA, at ulalaunch.com.

The $425 million WGS-8 will be the Air Force's eighth Wideband Global SATCOM satellite to launch — hence the name. These Boeing-built spacecraft operate in geostationary orbit, about 22,300 miles (35,890 kilometers) above Earth, where their orbital speed matches the rotational speed of the planet. WGS satellites therefore keep an eye on the same stretch of land continuously.

"WGS satellites are important elements of a high-capacity satellite communications system providing enhanced communications capabilities to America's troops in the field for the next decade and beyond," ULA representatives wrote in a launch description.

The first WGS craft launched in 2007. The constellation will eventually consist of 10 satellites, Air Force officials have said.