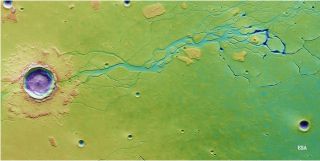 Beyond Earth, Mars is the most habitable planet in the solar system — but that doesn't mean we can simply move there and expect to live off the land.

Though the surface of Mars is more barren (and a lot more toxic) than the most arid desert on Earth, NASA has uncovered a vast underground supply of water ice that may, someday, be an oasis for future Mars explorers.

Key to our future Mars settlers' survival will be the utilization of resources already on the Red Planet, so the necessity of landing future Mars explorers near a known water resource is a no-brainer. Water isn't only a requirement for keeping astronauts alive, it's needed for fuel production and would sustain any burgeoning Martian agriculture. Put simply, unless we find Mars water and understand how to access it, our Mars colonization dreams are over. But the discovery of a vast reservoir of subsurface water ice by an orbiting NASA Mars satellite could represent a game-changer for the future of Mars colonization.

"This deposit is probably more accessible than most water ice on Mars, because it is at a relatively low latitude and it lies in a flat, smooth area where landing a spacecraft would be easier than at some of the other areas with buried ice," said Jack Holt, of the University of Texas, in a statement.

RELATED: Here's How Extraterrestrial Farming Will Work on Mars

The deposit was found beneath the famous Utopia Planitia, the Martian plain where NASA's Viking 2 robotic lander set down in 1976. Using data from NASA's Mars Reconnaissance Orbiter's ground-penetrating Shallow Radar (SHARAD), researchers discovered the huge slab of ice, ranging from 260 feet (80 meters) to 560 feet (170 meters) thick covering an area larger than the state of New Mexico. The deposit is 50-85 percent water ice mixed with dust and rocks.

Utopia is located halfway between Mars' north pole and equator, a region where water ice cannot currently persist on the surface. It is thought that the ice accumulated in the location when the planet was a lot more tilted than it is now. The Red Planet's tilt varies wildly over the course of its approximate 120,000 year cycles; its current axial tilt is around 25 degrees, but it can tilt as much as 60 degrees. This wild range causes significant climatic changes that forced the formation of ice from the poles to lower latitudes in the past.

"This deposit probably formed as snowfall accumulating into an ice sheet mixed with dust during a period in Mars history when the planet's axis was more tilted than it is today," said Cassie Stuurman, of the Institute for Geophysics at the University of Texas, Austin, and lead author of a study published in the journal Geophysical Research Letters.

The subsurface reservoir at Utopia represents a climatic record of these climatic shifts, protected by a 1-10-meter-thick layer of Mars rock and regolith — Martian "soil" which is composed of the ground-up dusty remains of eons of meteorite impacts. This thin surface layer means the first human Mars explorers could relatively easily drill into the water ice deposit, either mining chunks of water ice for processing, or directly heating the layer and pumping out liquid water.

Of course, the presence of water ice will lead to the speculation of the possibility of Mars life. Could there have been pockets of slushy liquid water underground that allowed microbial life gain a foothold?

"Where water ice has been around for a long time, we just don't know whether there could have been enough liquid water at some point for supporting microbial life," Holt added.

Utopia has long been suspected as a location where water ice is hiding. Polygonal surface features that are commonly seen in the Canadian Arctic are an indicator of subsurface ice are also present in Utopia. However, this is the first time that the presence of subsurface ice has been confirmed in the region. There is also evidence of ancient river channels in the region (pictured top) where it is thought that subsurface ice melted and flowed.

"The ice deposits in Utopia Planitia aren't just an exploration resource, they're also one of the most accessible climate change records on Mars," said co-author Joe Levy of the University of Texas. "We don't understand fully why ice has built up in some areas of the Martian surface and not in others. Sampling and using this ice with a future mission could help keep astronauts alive, while also helping them unlock the secrets of Martian ice ages."