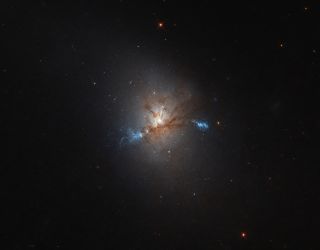 The galaxy NGC 1222 appears to be getting a head start on its Thanksgiving feast — astronomers believe this object is gobbling up two smaller galaxies, creating a stunning cosmic sight.

Located in the constellation Eridanus over 100 million light-years from Earth, NGC 1222 is a lenticular galaxy — traditionally quite smooth and featureless, and made, by and large, of old, reddish stars, according to a statement from NASA.

But a recent image of NGC 1222 captued by the Hubble Space Telescope shows an unusually action-packed scene. Surrounding the galaxy is evidence of a starburst — star formation on a massive scale  that occurred very recently. Because starbursts are known to be violent incidents, astronomers believe NGC 1222 is devouring gas from two close by dwarf galaxies, using the additional material to feed the star-making event.  [Galaxies: Collisions, Types & Other Facts  ]

The earliest discovery of NGC 1222 goes back to 1883 and is credited to French astronomer Édouard Jean-Marie Stephan, according to NASA. While the NGC 1222 has been captured in pictures, Hubble Space Telescope  provided this image with its Wide Field Camera 3, offering a unique view of this strange galaxy and its history. Hubble offers a clear view of the dark filaments of dust and bright filaments of gas contrasted against the smooth background of NGC 1222's original stars.

Hubble has been sending images of the universe back to Earth for more than 25 years. With the help of five servicing missions, in conjunction with the redundancies programmed into the craft originally, engineers believe Hubble will continue to work well into 2020. In addition, NASA plans to launch another powerful space telescope, the James Webb Space Telescope, planned the James Webb Space Telescope , in 2018.