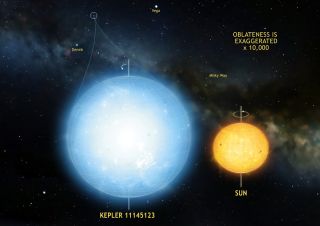 The star Kepler 11145123 is the roundest natural object ever measured in the universe. Stellar oscillations imply a difference in radius between the equator and the poles of only 3 km. This star is significantly more round than the Sun.
(Image: © © Laurent Gizon et al. and the Max Planck Institute for Solar System Research, Germany. Illustration by Mark A. Garlick.)

A star 5,000 light-years from Earth is the closest thing to a perfect sphere that has ever been observed in nature, a new study reports.

Stars, planets and other round celestial bodies bulge slightly at their equators due to centrifugal force. Generally speaking, the faster these objects spin, the greater the force, and the larger the bulge.

For example, the sun rotates once every 27 days, and an imaginary line drawn through its center at the equator is about 12 miles (20 kilometers) longer than a similar line drawn from pole to pole. The equatorial diameter of Earth, which completes a rotation every 24 hours, is 26 miles (42 km) longer than the polar diameter, even though Earth is much smaller than the sun. [Solar Quiz: How Well Do You Know the Sun?]

But the distant star, known as Kepler 11145123, has Earth, the sun and every other object that's ever been measured beat in terms of roundness, study team members said.

The researchers studied Kepler 11145123's natural oscillations, as observed by NASA's Kepler space telescope over a period of 51 months, from 2009 through 2013. (Kepler was designed to detect exoplanets by noting the tiny brightness dips that are caused when they cross their stars' faces, so the spacecraft is very sensitive to light fluctuations.)

The team, led by Laurent Gizon from the Max Planck Institute for Solar System Research and the University of Göttingen in Germany, then used this information to determine the star's size. This technique is known as asteroseismology, because it allows astronomers to probe stellar interiors in much the same way that geologists use earthquakes to study our planet's insides.

The researchers found that Kepler 11145123's equatorial and polar diameters differ by a mere 3.7 miles (6 km), even though the star is 1.86 million miles (3 million km) in diameter — about twice as wide as the sun.

"This makes Kepler 11145123 the roundest natural object ever measured, even more round than the sun," Gizon said in a statement.

Why is the star so round? It rotates about three times more slowly than the sun, but that's probably not the whole story. Magnetic fields can also help flatten stars, so part of the answer may lie in Kepler 11145123's magnetic environment, astronomers said.

There's no guarantee that Kepler 11145123 will keep its roundness record forever. Gizon and his colleagues plan to study other stars using their asteroseismological techniques, which they said have delivered unprecedented precision and may therefore open up new lines of inquiry.

"It will be particularly interesting to see how faster rotation and a stronger magnetic field can change a star’s shape," Gizon said. "An important theoretical field in astrophysics has now become observational."

The new study was published today (Nov. 16) in the journal Science Advances.