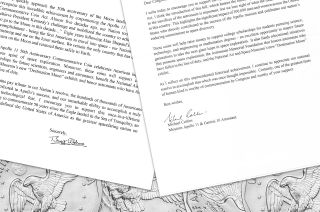 Legislation calling for the U.S. Mint to issue coins commemorating the 50th anniversary of the first moon landing has gained the support of the surviving astronauts who flew on the historic mission.

Buzz Aldrin and Michael Collins, who lifted off to the moon in July 1969 with the late Neil Armstrong, have each sent letters to Congress urging for the passage of the Apollo 11 50th Anniversary Commemorative Coin Act. The bill, which was first introduced in 2015, needs to be approved by both the U.S. House of Representatives and the Senate before Congress adjourns next month for the coins to be ready in time for the anniversary in 2019.

"I think the introduction of this bill, which honors the entire Apollo 11 team and pays tribute to the sacrifices of the astronauts is important, lest we lose sight of what the lunar landings meant to this country," wrote Collins, who orbited the moon as Armstrong and Aldrin walked on its surface. [Lunar Legacy: 45 Apollo Moon Mission Photos]

"Our nation landed Neil Armstrong and me," wrote Aldrin. "We remain the only country that has ever landed humans on the moon and returned them safely to Earth."

"This [bill] highlights the significant impact of 300,000 men and women across the U.S. who directly contributed to the success of the Apollo mission and celebrates our nation's enduring commitment to space discovery," Collins added.

The bill, which has been cosponsored by 298 members of the House and 11 Senators, calls for the U.S. Mint to strike curved gold, silver, and clad coins bearing the now-iconic image reflected in Aldrin's spacesuit helmet visor, as taken by Armstrong on July 20, 1969.

Proceeds from the Mint's sale of the Apollo 11 coins would benefit the Astronaut Memorial Foundation and Astronaut Scholarship Foundation's science, technology, engineering and math (STEM) programs, as well as the Smithsonian's new moon landing-focused gallery, slated to open in 2020.

The coins' sale would also offset the cost of their minting, such that they are produced at no cost to taxpayers.

"The Apollo 11 50th anniversary coin celebrates American ingenuity and our spirit of space exploration," wrote Aldrin. "Moreover, these coins will support college scholarships for future scientists, engineers and astronauts; benefit the National Air and Space Museum's new 'Destination Moon' exhibit; and honor astronauts who have fallen in the line of duty."

"[These coins are] an excellent opportunity to inspire future generations to take the next giant leaps," wrote Collins.

Aldrin's and Collins' letters join others sent by members of the space exploration community who have reached out to their elected officials to co-sponsor the legislation. The bill is facing competition from similar proposals for the Mint to issue commemorative coins for the football and basketball halls of fame. Congress is only able to authorize two coin programs per year.

After a month-long break for the Nov. 8 election, Congress resumed session on Monday (Nov. 14) for one week, prior to taking another break for the Thanksgiving holiday. After the House and Senate return on Nov. 28, there will be just three weeks for the Apollo 11 Commemorative Coin Act to be approved and signed into law.

"As I reflect on this unprecedented historical achievement, I continue to appreciate our national resolve to accomplish that which was once thought impossible," wrote Collins, in concluding his letter. "Certainly, one of the greatest feats of humankind is worthy of commemoration by Congress and worthy of your support."

"I encourage you," wrote Aldrin, "to support this once-in-a-lifetime opportunity to commemorate 50 years since Eagle landed, an event that defined the United States of America as the greatest spacefaring nation on Earth."

See if your state's senators are cosponsors and if not how to contact them in support of the Apollo 11 50th Anniversary Commemorative Coin Act at collectSPACE.