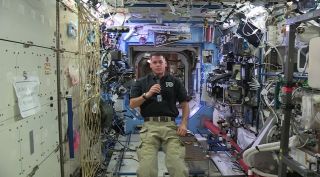 Kimbrough is the commander of Expedition 50 aboard the space station and a retired U.S. Army Colonel. In the video message, he paid tribute to U.S. service members and recognized the sacrifices they and their family members make everyday.

"As I orbit the Earth at an altitude of 250 miles, I am constantly in awe of the sight of our planet below," Kimbrough said in the video released by NASA. "I am equally awestruck by those brave Americans who served, and who are currently serving around the world in the U.S. Armed Forces, in the defense of our freedom." [NASA Salutes Veterans From Land & Space]

Kimbrough  arrived at the orbiting lab on Oct. 21, along with Russian cosmonauts Sergey Ryzhikov and Andrey Borisenko (of Roscosmos), for a four-month mission aboard the space station.

"As we commemorate Veterans Day," Kimbrogh said, "please take a moment to remember those who made the ultimate sacrifice, and those currently serving on behalf of us every minute, every day, to keep us free — to allow us to explore and enrich the lives of others on Earth. Thank you."