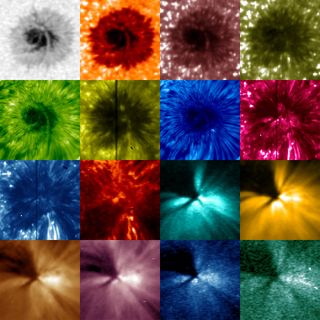 Researchers combined data from NASA's Solar Dynamics Observatory and Interface Region Imaging Spectrograph as well as the Big Bear Solar Observatory in California. In doing so, they followed a solar wave's path upward from the sun's surface into its atmosphere for the first time.
(Image: © Zhao et al./NASA/SDO/IRIS/BBSO)

For the first time, a certain type of solar wave was caught surfing from the sun's surface up through the star's atmosphere, lending insight into how the sun's material moves and mixes.

The new imagery will help scientists better understand how the sun's lower atmosphere works, NASA officials said, and could help researchers solve a long-standing mystery about the sun: the coronal heating problem.

Models of the sun indicate that the star should be hottest at its core, where hydrogen is fused, and that each layer above that should be progressively cooler. However, the sun's outermost layer, the corona, is about 100 times hotter than the atmospheric layer below. The newly spotted waves aren't enough to account for all the heat, but they could be partially responsible for the excess, NASA officials said. [Scientists' Favorite Sun Photos from the Solar Dynamics Observatory (Gallery)]

"We see certain kinds of solar seismic waves channeling upwards into the lower atmosphere, called the chromosphere, and from there, into the corona," Junwei Zhao, a solar scientist at Stanford University in California who led the study, said in a statement. "This research gives us a new viewpoint to look at waves that can contribute to the energy of the atmosphere."

Data from NASA's orbiting Solar Dynamics Observatory (SDO) and Interface Region Imaging Spectrograph (IRIS), along with the land-based Big Bear Solar Observatory in California, caught the waves in action. This find followed years of speculation that the waves spotted on the sun's surface, called the photosphere, were linked to the waves seen in the sun's lower atmosphere, or chromosphere.

This analysis was the first time researchers followed such a wave up through the atmosphere from the surface, according to the statement. Scientists tracked the waves using a technique called spectroscopy, which takes advantage of the fact that high-temperature materials (such as those found in the sun) release distinctive forms of light depending on the temperature and the material.

"Since we know how the sun's temperature changes throughout the layers of its atmosphere, we can then order these wavelengths according to their height above the surface — and essentially watch solar waves as they travel upwards," officials said in the statement. The researchers could see that the sun's magnetic field had a marked effect on the waves' paths, forcing them to curve instead of traveling a straight line.

The waves also revealed information about the atmosphere above sunspots, which are cooler areas on the sun that appear to form in zones where magnetic fields are concentrated, the researchers said. The waves can show information about temperature, density and pressure in the sun's atmosphere in those areas, as well as the magnetic field strength and direction, Ruizhu Chen, a co-author and graduate student scientist at Stanford, said in the statement.

A study based on the research was recently published Oct. 11 in The Astrophysical Journal Letters.