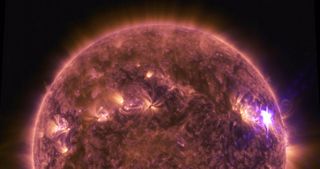 This still of the sun from a video by NASA's Solar Dynamics Observatory shows a jaw-dropping view of a solar flare (at right) that erupted on April 17, 2016.
(Image: © NASA's Goddard Space Flight Center/SDO/Genna Duberstein)

A spectacular new video of the sun captured by a NASA spacecraft puts you up close and personal with a fiery storm on our closest star — all in mind-boggling 4K resolution.

The video, taken by NASA's powerful Solar Dynamics Observatory (SDO), was recorded on April 17 as an active sunspot unleashed an intense solar flare. The heart-shaped sunspot AR 2529 fired off a moderate M6.7-class solar flare during the eruption. It appears in the video as a brilliant flash of light.

"Solar flares are powerful bursts of radiation," NASA officials wrote in a video description. "Harmful radiation from a flare cannot pass through Earth's atmosphere to physically affect humans on the ground, however — when intense enough — they can disturb the atmosphere in the layer where GPS and communications signals travel."

The April 17 solar flare triggered only brief radio blackouts, NASA officials said. The SDO spacecraft, which keeps constant watch on the sun, recorded video of the event in several wavelengths of extreme ultraviolet light, they added.

This isn't the first time NASA's SDO recorded an amazing view of the AR 2529 sunspot. Earlier in the month, the solar observatory tracked the active region as it made its way across the sun's face, recording stunning video of the superhot plasma flows in the sunspot.

At the time, the sunspot was large enough to swallow three Earths, mission scientists said.

"Sunspot regions are areas of intense magnetism so that plasma is being pulled along magnetic field lines between areas of opposite polarity," SDO mission scientists added in a video description.

NASA launched the SDO spacecraft in 2010 to keep a constant eye on the sun and track space weather. The spacecraft is one of a fleet of observatories in space that monitor the sun for solar flares and other space-weather events.