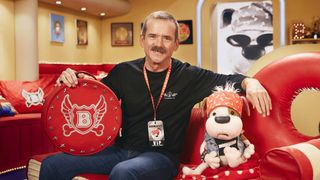 Retired Canadian astronaut Chris Hadfield reads his new picture book, "The Darkest Dark" (Little, Brown and Co., 2016), to an eager rock-star dog in an episode of the new Amazon Prime video series "Bookaboo," which was released online Oct. 28. (You can watch a clip of the episode here.)

"Bookaboo" follows a little puppy puppet who's on tour as a famous rock drummer — but he can't go onstage until he's had a story read to him. The eight-episode first season came out all at once on Amazon's streaming service, and features celebrities reading to the puppy backstage. The pictures from the books are animated as part of the narrative.

Hadfield enjoyed the opportunity to read his book, which describes a young Chris afraid of the dark, to a new (canine puppet) audience. [12 Highlights of Astronaut Chris Hadfield's High-Flying Career]

"He's sort of got this strange cockney accent and a very delighted but almost aging-rock-star view of the world, which is kind of fun to talk to," Hadfield told Space.com. "You sort of feel like you're talking to Ringo Starr somehow, or one of the Rolling Stones."

"The Darkest Dark," which came out in September and is illustrated by The Fan Brothers, addresses how to deal with fear and danger. Astronauts face particularly dangerous situations, Hadfield said, but learning to deal with fears can be relevant to everybody — like the narrative's young version of Chris, who wants to be an astronaut and is terrified of the dark.

Hadfield, one of few Canadian astronauts, served as an astronaut for 21 years and flew on three space missions: one shuttle mission to the Russian space station Mir, one to the International Space Station and one long-duration space station stay. He's traveled to give talks at many schools — "I've lost count of the number," he said — and saw this production as an extension of that, and an opportunity to spread his book and message about bravery and facing fears to an even larger audience.

"Bookaboo" aims to share the experience of being read to aloud with their young audience, showing celebrity role models they can relate to and maybe inspiring more adults at home to read to their children, the show's representatives said in a statement.

To Hadfield, the show offers a particularly engaging format to share his story: "If you're a child watching the show, you really feel like you're part of the group that the person is reading the book to, because the dog does all the reactions," Hadfield said. "It's very absorbing."