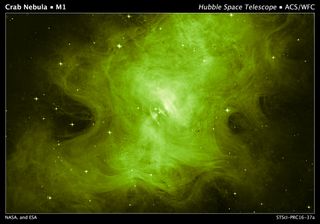 An eerie view of the Crab Nebula shows a powerful neutron star shrouded in the gas from a supernova explosion. The energy from the swiftly spinning neutron star creates an expanding ring of waves through the debris (visible at center).
(Image: © NASA and ESA)

The wispy tendrils of a long-dead star curl around a dense sphere of extraordinary power in this spooky view of the Crab Nebula.

The star that became the Crab Nebula went supernova centuries ago, from Earth's perspective — in 1054, it burned so brightly that skywatchers could see it shining during the day for more than three weeks, according to records from the time, and its fires were visible to the naked eye at night for two years. [Boo! The Spookiest Nebula Photos Ever]

The excess gas stretches outward from the dead star's location, 6,500 light-years away in the constellation Taurus, and it conceals a powerful heart: a neutron star with the sun's mass packed into just a few miles' diameter. The object spins 30 times a second, generating a trillion volts of power and creating an expanding series of shock waves (seen in the center of the photo). Its regular spin and radiation toward Earth make it a pulsar, which researchers use as cosmic clocks.

The image was captured by the Hubble Space Telescope over the course of nine months in 2012, and was given a green hue in honor of Halloween, Hubble scientists said in a statement. The whole gaseous tableau stretches 10 light-years across.

Our own sun is smaller than the star that created this stellar graveyard, so its ultimate fate will leave a different scene. As the sun's fuel supply runs down and it begins fusing heavier elements, it will grow larger and larger — first swallowing up Mercury's, then Venus', then Earth's current orbit. Its outer layers will puff away, creating a shell-like nebula of gas. The stellar core will be left as a dense white dwarf star, near the size of Earth — the solar system's final resting place, shrouded in a gauzy planetary nebula.