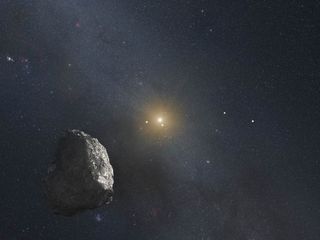 An artist’s impression of a Kuiper Belt object (KBO), located about 4 billion miles from the Sun.
(Image: © NASA, ESA, and G. Bacon (STScI))

A mysterious object in the outer reaches of the solar system is revolving around the sun in an abnormal way, and scientists currently cannot explain why.

The object has been nicknamed Niku, a Chinese adjective that means "rebellious," by the group of researchers who announced its discovery in August. This name was chosen because the object's orbit is retrograde, meaning it moves in the opposite direction of nearly everything else in the solar system.

Niku was discovered by researchers who used the Panoramic Survey Telescope and Rapid Response System (Pan-STARRS) in Hawaii, and it lies in the outer reaches of the solar system, about 35 times farther away from the sun than Earth, beyond the orbit of Neptune. [The Pan-STARRS Asteroid Hunting Telescope]

Niku's orbit is inclined at an extreme 110-degree tilt with respect to the relatively thin, flat zone in which the eight major planets of the solar system orbit. In contrast, most trans-Neptunian objects (TNOs) are in much less inclined orbits.

The retrograde and extremely tilted nature of the orbits of Niku and another TNO nicknamed "Drac" led the scientists to try to find out whether there were objects with similar orbital characteristics that were listed in the Minor Planet Center database (which contains information about more than 1,000 small bodies in the solar system). They discovered four other objects with orbits that were either retrograde or nearly retrograde (meaning is orbit is inclined by less than, but close to, 90 degrees) and were also highly tilted. Two of these objects are Centaurs — bodies that orbit between Jupiter and Neptune.

The scientists were surprised to find that all six of these objects appear to orbit within a common plane.

"They're not randomly distributed in the sky — they all seem to be aligned," study co-author Matthew Payne, an astrophysicist at the Harvard-Smithsonian Center for Astrophysics in Cambridge, Massachusetts, told Space.com.

Computer simulations that the researchers carried out suggest that Niku and Drac may have been in their orbits for hundreds of millions of years. In addition, the scientists suggest that there may be more extremely inclined objects in this group.

It remains uncertain why these six objects apparently cluster together. Astrophysicists Konstantin Batygin and Michael Brown at the California Institute of Technology in Pasadena recently found that they may have been scattered off-kilter from the rest of the solar system by the gravitational pull of "Planet Nine," a world about 10 times Earth's mass that may exist about 500 times farther away from the sun than Earth.

Another possible origin for this group is "galactic tides." As the sun orbits the center of the Milky Way, it moves up and down within the disk of the galaxy, and "tidal forces are exerted on the solar system that are thought in general to have a variety of effects, such as disturbing the Oort Cloud and throwing comets into the solar system," Payne said.