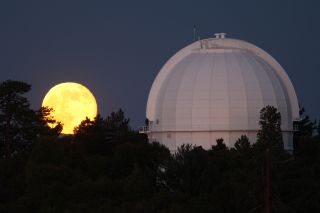 The full Hunter's Moon of October will rise in the early hours of Sunday morning (Oct. 16) — and by some definitions, it's also a "supermoon."

October's full Hunter's Moon follows the full Harvest Moon of September, which falls around the start of the autumn equinox. The moniker Hunter's Moon was coined in the Northern Hemisphere, and refers to the time of year when deer and other game are fattened, and hunters begin stocking up for the winter months ahead.

This month, the full moon of October will peak on Sunday at 12:23 a.m. EDT (0423 GMT). However, to the casual skywatcher, it will also appear full in the night sky a day prior and after it reaches peak fullness. [Amazing Supermoon Photos: Biggest Full Moon of 2014]

A full moon occurs each month when the sun, Earth and moon line up, with the moon on the opposite side of the Earth to the sun. At this time, the Earth-facing side of the moon is completely lit up by sunlight. A lunar eclipse occurs when the three bodies are lined up such that the moon passes through the shadow of the Earth. Typically, the moon is not completely darkened by the shadow, but instead turns a deep shade of red.

October's full moon will also take place when the moon is at its closest point to Earth in its 27-day lunar orbit (this point is known as perigee). Some people define a full moon at perigee as a supermoon.  The supermoon is not a scientific term, however, so there are varying definitions. The Slooh Community Observatory uses the term supermoon only once per year, to refer to the full moon that comes closest to Earth in its orbit, a Slooh representative told Space.com. (In addition, Slooh uses the term "mega moon" instead of supermoon.)

In collaboration with The Old Farmer's Almanac, Slooh will offer a live broadcast for this month’s full moon on Saturday (Oct. 15). You can also watch it live on Space.com, courtesy of Slooh. The broadcast will share facts and history about the full Hunter's Moon, as well as an interview with Slooh Astronomer Bob Berman, who will discuss the difference between a full moon and a supermoon.

October’s full moon has also been assigned a few other names, in addition to Hunter's Moon. The Old Farmer's Almanac, for example, also refers to it as the Travel Moon and the Dying Grass Moon, as farmers traditionally harvest their fields in late September or early October.

Since the full moon of October falls mid-month, October's new moon (when no sunlight falls on the Earth-facing side) will rise Oct. 30, just in time for Halloween.

Editor's note:If you snap an awesome photo of the moon that you'd like to share with Space.com and our news partners for a potential story or gallery, send images and comments in to managing editor Tariq Malik at spacephotos@space.com.