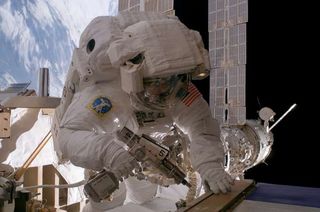 Astronaut Sunita Williams, Expedition 14 flight engineer, uses a pistol grip tool (PGT) as she participates in the first of three sessions of extravehicular activity (EVA) in nine days, as construction continues on the International Space Station on Jan. 31, 2007.
(Image: © NASA.)

Astronauts aboard the International SpaceStation (ISS) have a long Super Bowl Sunday ahead as they prepare to ventureoutside the orbital laboratory for their second spacewalk in less than a week.

"That'sSuper Bowl Sunday," said Glenda Laws, NASA's lead Expedition 14 extravehicularactivity (EVA) officer, of tomorrow's spacewalk. "We'll get that EVA out of theway though in plenty of time for everyone to watch the football gameafterwards."

Lopez-Alegriaand Williams are performing an unprecedented threeEVAs in two weeks, and expect to spend around six hours working outside theISS on Sunday. Lopez-Alegria is also expected to make a fourth, unrelatedspacewalk on Feb. 22 with Russian cosmonaut and flight engineer MikhailTyurin.

Thespacewalk marathon marks the most densely-packed series of EVAs without a visitingNASA space shuttle crew.Shuttle astronauts routinely make several spacewalks within days of one anotherwhile docked at the ISS on relatively short missions. But fatigue and wear arelarger concerns for the long-duration astronauts assigned to station Expeditioncrews, NASA officials said.

"The healthof the crew, the stamina of the crew is something that we watch very closely," DerekHassmann, NASA's lead ISS Expedition 14 EVA flight director, said after theJan. 31 spacewalk.

Clad inbulky NASAspacesuits, Lopez-Alegria and Williams duties on Sunday are mostly a mirrorimage of their previous Jan. 31 spacewalk. As in that excursion, Lopez-Alegriawill sport a spacesuit marked with red stripes while Williams' spacesuit willbe white with no stripes [image].

"We'rehoping that with everything that we learned about body positions and so on...thatwe'll be able to move through the operations on the [cooling] loop reconfigwill go a bit smoother next time," Laws said.

Duringtheir Wednesdayspacewalk, Lopez-Alegria and Williams switched the space station's Loop Acooling system from a temporary set up - which shed heat from a radiator onthe outpost's mast-likePort 6 truss - to a permanent configuration that runs through heatexchangers in the station's U.S.Destiny module. On Sunday, the spacewalkers will tackle the second half ofthat cooling system, Loop B, while taking care to avoid any leaks of toxicammonia coolant in a worksite renown for its tight squeezes and "Rat's Nest" ofelectrical and plumbing lines [image].

Once thecooling system work is complete, the Expedition 14 spacewalkers will watch overthe remote-controlled retraction an aft-facing radiator on the Port 6 trussthat is no longer required [image].

Theastronauts also plan to retrieve the second of two fluid lines on an unneededreservoir filled with ammonia coolant, photograph a solar array extending tostarboard from the Port 6 truss, and wire up a power transfer system that willallow future NASA space shuttles tospend more time docked at the ISS by drawing on the outpost's power supply.

If anyspare time remains, the spacewalkers could perform extra tasks -- known as getaheads -- which include taking snapshots of the station's shuttle docking portto determine if any corrosion or debris is responsible for spotty communicationlinks between the ISS and visiting orbiters during recent NASA shuttle missions. ButLaws stressed that completing the spacewalk's primary chores remain theExpedition 14 crew's top priority.